PAM announces Kervin “Milo” Freeman as Candidate for Constituency No. 3 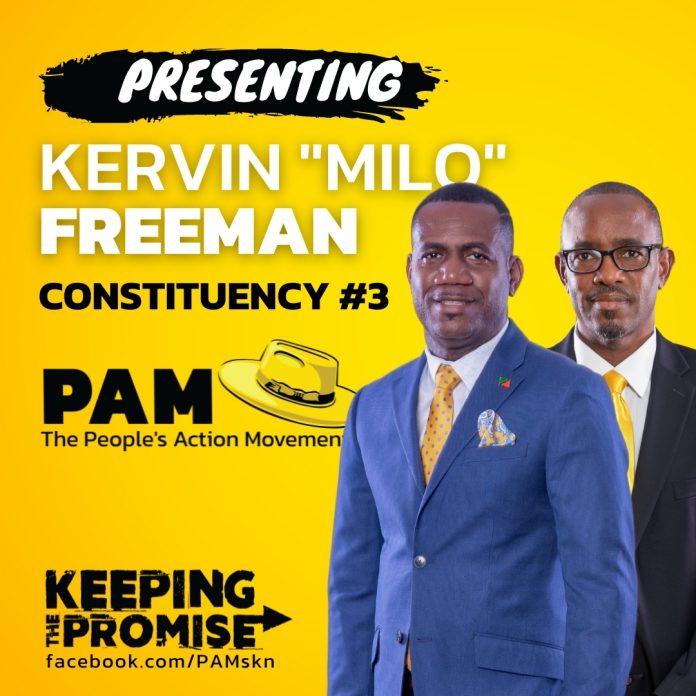 St. Kitts and Nevis (WINN) – The People’s Action Movement (PAM) continues on the campaign trail with their truncated launch of candidates in constituencies that have remained unrepresented by a PAM candidate in the last two General Elections.

Kervin “Milo” Freeman has been named the PAM candidate for Constituency No. three to contest the seat in the upcoming snap election expected within the next 80 days.

The announcement was made during a Press Conference at the OJ’s Commercial Complex in Camps on May 19.

“Mr Freeman… brings a wealth of experience to the team and a history of advocacy, especially on behalf of the small man. He is truly in the conscience of this nation and an unquestioned fearless advocate. Milo is a genuine public servant of the highest order. But more importantly, he has been a man who has remained grounded in his community and very active in many spheres,” said Leader of the PAM Shawn Richards in his introduction of the candidate for No. three.

Richards continued, “We look forward to his campaign in constituency No. three, and he and his team can rest assured that we will be here with him every step of the way. We will give him every assistance, and we will stand shoulder to shoulder with him on his journey towards victory.”

Freeman of Trafalgar Village in Constituency No. three is a public servant at the St. Kitts Air and Sea Ports Authority (SCASPA), a social commentator and was described by his fellow members of the PAM as a “man of the people”.

For the last two elections, the two members on St. Kitts of the three-pronged Team Unity Coalition consisting of PAM, CCM, and PLP have never run against each other.

In 2015 PAM did not run candidates in No three, where PLP co-founder Sam Condor contested the elections and lost, and in No. seven, the PLP’s leader Dr Timothy Harris’ constituency.

PLP, on the other hand, did not run candidates in the other six constituencies.

In 2020, PLP ran candidates in three constituencies, winning two, and PAM ran in five, securing all five of their seats.

Now for the first time since the formation of the coalition and in the History of St. Kitts and Nevis, three parties may be contesting all eight contingents on St. Kitts, which was caused by the irreparable tensions in the once tripartite alliance.

The PAM has two constituencies left to launch their candidates, No. six and seven.