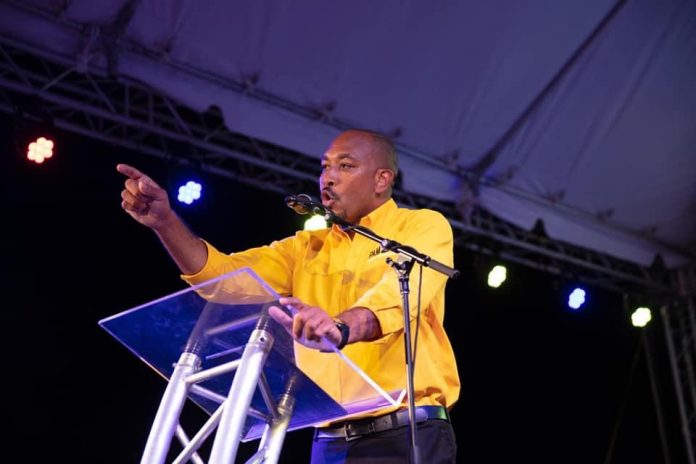 St. Kitts and Nevis (WINN): People’s Action Movement Chairman and Candidate for constituency No 2, Jonel Powell, has signalled that he has filed an action with the courts of St. Kitts and Nevis because he has concerns over the voters list in No 2, 1 and 4 for the upcoming August 5 elections.

“I will be filing documents in the court asking the court to make a determination on this matter to intervene and make a determination, and if my legal advice is correct, and I believe strongly that it is, these names will have to be removed from the list that has been presented to us to be used for the election next week Friday,” said Powel during the July 29 broadcast of WINN’s Voices.

The former Minister of Education, Youth, Sport and Culture suggested that the addition of names to the list is either voter padding or a serious mistake on the part of the Electoral Office.

Powell stated that 235 names had been added to the list in his constituency, Central Basseterre stating that 117 were registered in May and alleging an additional 118 names were subsequently added and not present on the annual list released in January or any of the official revised lists.

“There are a number of names that have been included in that list that were not to find either the annual register, which comes out every January, and so would have been published in January of this year, and they don’t appear on any of the monthly revised lists since then. So the question is, where did these names come from?”

Powell said the number of names added to Constituency No 4 is 47 to date, being contested by incumbent Lindsay Grant.

Another issue outlined by Powell was the legitimacy of the revised voters list for May 2022, which he says still has outstanding objections.

Using May as an example, Powell said that after people have registered in May, a list is produced and published for scrutiny on June 15, and political parties have until June 25 to object to any of the names that are on or should be on that list. After the objection process, a hearing is scheduled, the registration officer will listen to the evidence and determine whether the name makes it to the list or not, and a second list would be published in the month after, July in this case.

Powell suggests that a revised list for May was published despite outstanding objections.

“A revised list was published on the 15th of July, despite the fact that there were some 60 or 70 objection hearings that have not yet been heard. The reasoning and I’m assuming the reasoning behind that, is they wanted to get that list out before the election was announced on the 17th to try and include those names on that final list for the August 5 election. But the law is very clear… the revised list is basically having gone through the objection hearing; this is a confirmed final list for persons registered in the month of May. How can you put out a final list when you have outstanding objection hearings.”

The PAM candidate for No 2 said he is confident that the matter will be dealt with, considering the importance.

“As an officer of the court myself, I have confidence that the court will make itself available to deal with a matter of such urgency and such importance. The court knows that we have an election coming up. The court is aware of the several issues that we’ve had, in St. Kitts and Nevis, unfortunately, over the last however many elections… and so I am confident that the court will make itself available for us to determine these matters so that democracy is upheld in this country.”

According to Powell, the party is still waiting for the final numbers for the other constituencies.

In a previous conversation with WINN on July 29, the Supervisor of Elections, Elvin Bailey, said there are currently no hearings that would affect the list for the upcoming election day.