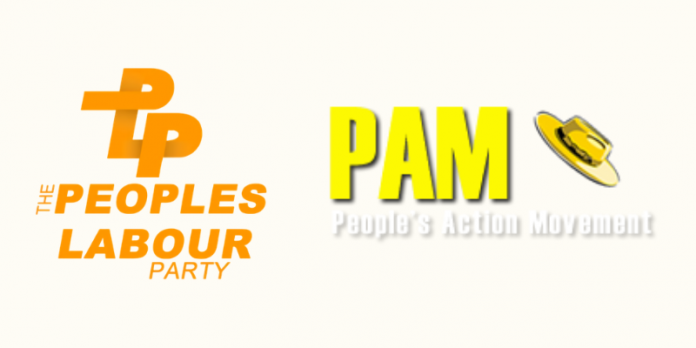 The People’s Action Movement confirmed the attending members in a press release on Thursday morning (March 23), that  Deputy Chairman Azard Gumbs and Assistant General Secretary Danielle Warner will attend the PLP Convention on behalf of PAM.

The statement continued, “Consequently, at our Party’s weekly Executive meeting on Tuesday, March 22 2022, it was approved that our party will be represented by a two-member delegation comprised of the Deputy Chairman, Mr Azard Gumbs and Assistant General Secretary, Ms Danielle Warner.”

In addition, the statement reads, “ The People’s Action Movement  and our National Leader, the Hon Shawn Richards  continue to work in the best interest of St Kitts  and Nevis and are committed to the task of ensuring that the operations of our Government are recalibrated and refocused on the goal of keeping the promise to deliver greater prosperity for all citizens.”

Craig Tuckett, Director of Communications of the People’s Labour Party, reacted to the decision by PAM this morning. morning.

“We thank the People’s Action Movement for acknowledging our invitation to attend the 6th annual National Convention. PLP (People’s Labour Party continues to be a part of this great Team Unity Movement, led by our Party leader and Prime Minister. Dr The Hon. Timothy Harris. We  acknowledge that they will be sending two representatives in the persons of their Deputy Chair and Assistant Secretary and we will ensure that all protocols are followed so that we ensure that – that experience for them will be one of love, embrace, inclusion and Unity.”

There is a growing concern in the public of rumblings within the Team Unity government. Several topics like leadership term limits and the disbursement of Citizenship by Investment funds have been hot button topics between senior Team Unity officials.

In response, Tuckett said retaliation is not expected from the People’s Labour Party in any form.

“That is not our makeup; that is not our psyche, that is not our Genesis. Our Genesis is a God-fearing party. We believe in the  Christian principles that have been exposed in the Holy Scriptures and that is why we went and show our support to the People’s Action Movement at their Convention and we remained there, representing the People’s Labour Party, right from the beginning to the end. If we are invited by any other  sister  Party of the Team Unity Movement to their Convention or events, we will gladly attend and we will show that level of respect, civility and love and inclusion and unity because that’s what the people want.”