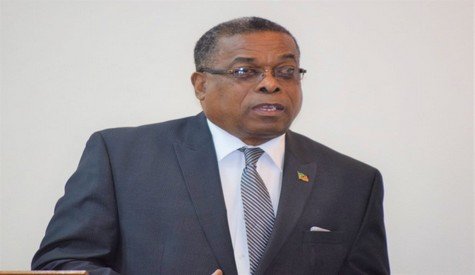 St Kitts and Nevis (WINN): Ian Patches Liburd is crying foul, after his party’s announcement that it was inviting applications for his job.

Mr. Liburd is currently the People’s Action Movement’s (PAM) candidate for St. Christopher 1, East Basseterre, where he has had mixed results – winning in 2015 and losing in 2020.

In a Tuesday, June 8 press release, PAM’s chairman Jonel Powell invited candidates to apply to be the party’s candidate in the next general election.

He added that high-quality candidates were essential for effective democracy and it was critical for the country to maintain a strong democracy.

But Mr. Liburd, in a letter dated June 9, 2021, to Mr. Powell, said he was not granted the courtesy of being apprised of the development and such conduct could undermine the support gained by PAM, under his leadership, within the constituency.

Mr. Liburd reminded his party that it took his effort, energy, and resources in 2015 to recapture East Basseterre for PAM after it spent 22 years in the political wilderness, suffering five consecutive defeats to the St. Kitts Nevis Labour Party.

In 2015 Mr. Liburd won the constituency by four votes. He lost the 2020 elections by 24 votes and contested the result in court without success.

Mr. Liburd copied his letter to constituents informing them that he held no discussion with the PAM National Executive nor was there “even the pretense” of a conversation with the Chairman about exiting the political arena. 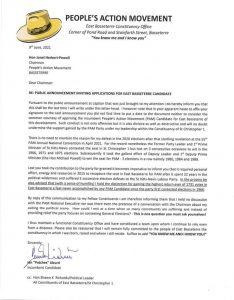