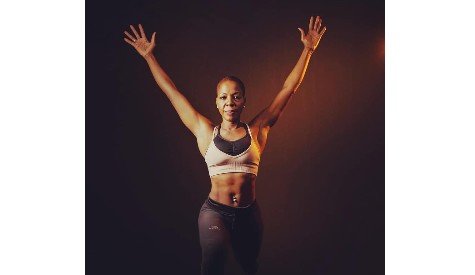 St Kitts and Nevis (WINN): During the Tuesday (September 29) broadcast of Island Tea, Paula Surgeon Collins a certified personal trainer, track coach and recent graduate of the National Academy of Sports Medicine highlighted some important aspects of fitness as a means to help increase longevity in life.

The married mother of three in speaking about how she got into fitness mentioned that she was never athletic growing up as a sheltered girl. Collins worked in accounting for a number of years at Ernst & Young. In her 20s while living in the United States she started putting on weight and she was confused.

“I remember going into World’s Gym and I would try… [a trainer asked] we’re doing a fitness course, do you want to do it? So I said okay…It wasn’t a thing that I had gone out to do… we did a two week course …and for that two weeks I lost… 12 pounds ”

She mentioned that it’s all in the eating. Resistance training is what drives muscle protein synthesis and the other thing that drives it is good quality protein.

“One of the things that I had gone back and restudied and realized, fat has been given this bad name over the years because back in the day we were limiting our fats… but fat is so important the right type of fat… fat drives the organs, you need fat…”

Collins says she is her own scientist when it comes to fitness trends. As a trainer she feels it is her responsibility to engage in fitness trends herself before presenting the style of work out routine or diet to prospective clients. One cannot just trust the research out there without trying it on themselves first.

In speaking about the Ketogenic diet (or keto diet, for short) Collins stated:

“The protocol with keto… is you have to know the state of your body… say for instance your body is not optimal, your liver is not optimal… and you try to incorporate a keto, you can run into problems. That is why it is important to know your health status.”

According to an article posted on Healthline, the ketogenic diet is a low-carb, high-fat diet that may even have benefits against diabetes, cancer, epilepsy and Alzheimer’s disease. It involves drastically reducing carbohydrate intake and replacing it with fat. This reduction in carbs puts your body into a metabolic state called ketosis. When this happens, your body becomes incredibly efficient at burning fat for energy. It also turns fat into ketones in the liver, which can supply energy for the brain.

“There’s a thing that happens in our fitness; it’s the shaming… You have skinny shaming, fat shaming, and muscle shaming.”

Muscle is the largest organ that drives longevity Collins shared. When using cancer as an example Collins stated that chemotherapy is the poison that degrades the body and the ability to recover depends on the muscle one has.

“People are not sleeping and that is important. The only time you can get away with [not sleeping] is a fasting protocol. Because when you fast your body doesn’t need as much rest…when you don’t sleep your liver cannot do the work that it’s designed to do…so you have to have those organs recovering to do the process of breaking down your food.”

“You have to look at you and say… I like myself this way and I like this… but you have to be more cognizant that each one of us are made differently…different skeletal muscles, different aesthetics. So you can only make you the best you can. You can’t look like someone else and when we try to look like someone else that insecurity and that inefficiency is what’s the problem.”