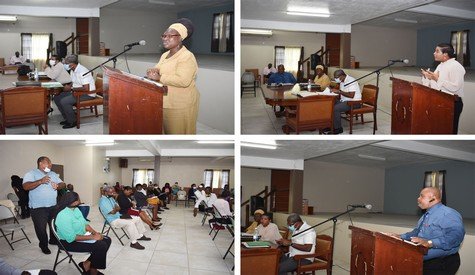 BASSETERRE, ST. KITTS (S.T.E.P.) — Chairman of the STEP Regularisation and Pensions Reform Committee, Mr. Levi Bradshaw, has advised Permanent Secretaries and Heads of Departments to provide in their budget for 2021 resources to cater for STEP workers who will have transitioned into Government Auxiliary Employees (GAEs).

“Chairperson of our Public Relations and Public Awareness Subcommittee, PS Ron Dublin-Collins, and his team suggested that we meet immediately with the heads of departments and permanent secretaries so they can be aware of what is happening,” said Mr. Bradshaw.

Chairman Bradshaw, who is also the Accountant General, observed that the meeting was important, “because when the STEP workers are ready to transition, which would have budgetary implications, you would have to provide in your budget for 2021 the necessary resources to ensure that these persons are paid their weekly wages.”

Mr. Bradshaw made the remarks on Wednesday, October 7 at a meeting with permanent secretaries and heads of government departments held at the Department of Agriculture Conference Room in LaGuerite which was organised by the Regularisation and Pensions Reform Committee. It was chaired by Chief Personnel Officer, Ms. Sheridane Warner.

“The committee was charged with primarily delivering two mandates, 1) the operationalisation of the Contributory Pension Plan by the 1st of September this year and 2) the regularisation of STEP workers as Government Auxiliary Workers by the first day of July of this year,” said Mr. Bradshaw. “By a Cabinet Submission, Number 153 of 2020, which was presented to the Cabinet on Monday the 7th of September this year, the Committee made some recommendations and some of our recommendations relate to the regularisation of the STEP workers.”

According to Mr. Bradshaw, STEP workers are assigned to the various Federal Government ministries, departments and corporations and to the private sector in both islands in the Federation and his committee felt that the regularisation of those workers should be undertaken on a phased basis.

He told the meeting that the committee’s task now is to basically make a determination where they will go first and that the committee felt that it was easy to approach the exercise in a phased process by starting the process with those persons who are assigned to government ministries and departments.

He added: “The effective date of hire for those persons who are qualified to come across into the public service is the first day of July 2020, so the appointment would be retroactive to that date.”

In the meantime, the Ministry of Legal Affairs Representative on the Committee, Mrs Nisharma Rattan-Mack, informed the permanent secretaries and the heads of government departments that the Government Auxiliary Employees Act No. 19 of 2012 is the legislation that will be guiding them as it relates to the STEP workers regularisation.

“It is very important that all permanent secretaries, all heads of departments familiarise yourselves with this piece of legislation, because this is the legislation that will be guiding the employment process for the STEP employees,” said Rattan-Mack. “So you won’t be using the Public Service Commission – those are not the rules that are going to apply to STEP workers.”

The meeting was also addressed by the Chairperson of the Committee’s Public Relations and Public Awareness Subcommittee, Permanent Secretary Mr. Ron Dublin-Collins, while Director of the Skills Training Empowerment Programme (STEP) Mr. Emile Greene, who was accompanied by STEP Office Manager Mrs. Agatha Caines, responded to some queries raised by the heads of departments.