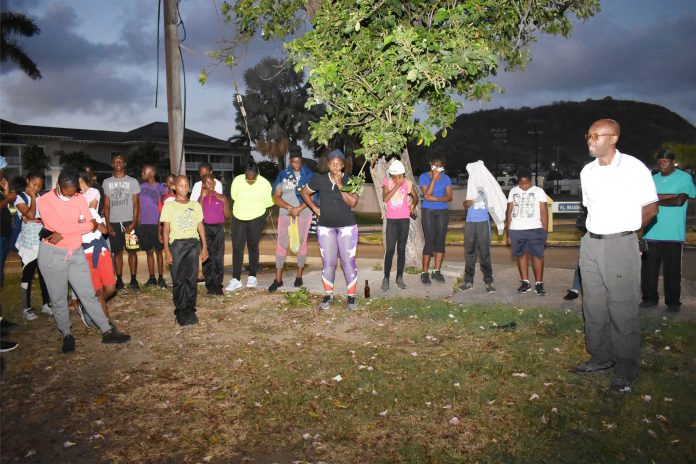 BASSETERRE, ST. KITTS, June 28, 2022 (MMS-SKN) — Last minute change of the route did not deter the youthful members of Philadelphia Pathfinders Club of Tabernacle Village from executing a successful fundraising walk-a-thon held in aid of the forthcoming dedication of their church.

The walk-a-thon which was held in collaboration with the Men’s Ministry of the Philadelphia Seventh Day Adventist Church in Tabernacle, took place on Saturday, June 25 and according to Pastor Theodore Smith, funds raised will be used during the dedication of their church that will be held on Sunday, July 10.

Initially, the walk-a-thon was due to take participants from the airport roundabout along the Kim Collins Highway to the Frigate Bay lawns. However, due to fringe activities of the St. Kitts Music Festival they were advised that Frigate Bay lawns would not be accessible and were forced to change the route at the last minute. They instead walked in the opposite direction along the F. T. William Highway and ended up at the green pasture outside Beacon Heights Estate.

The walk-a-thon by the Philadelphia Pathfinders Club had been advertised as one with a difference – a fundraiser and a fun-raiser. Members of all ages from all the Seventh Day Adventist Churches along with their friends gathered at the airport roundabout from as early as the advertised time 6:30 p.m. but set off at 7:15 p.m. after Pastor Theodore Smith invoked God’s blessings on the participants.

Because of the late change of venue, when the participants arrived at the pasture outside Beacon Heights Estate they found organisers working overtime to erect the tents and the much beloved bouncing castle. A power generator was switched on, after they would have been in the dark for quite a while, to the shouts of ‘and there was light!’

“Tonight we have the Pathfinders in collaboration with the Men’s Ministry who have decided to have this fundraiser in preparation for the dedication of our Philadelphia Seventh Day Adventist Church,” said Pastor Theodore Smith who is in charge of the Sandy Point Seventh Day Church, Mt. Moriah Church in Saddlers, and Philadelphia in Tabernacle.

“So we came together and decided to have a fun-night where we are able to raise some funds, through sale of food and drinks, to assist in the completion and preparation of our dedication,” observed Pastor Smith who was accompanied by his wife Mrs. Sonia Smith. “The dedication will be on the 10th of July at 1:00 p.m.”

According to Pastor Smith, all the Seventh Day Adventist Churches had been invited and not only Pathfinders but adults as well. They all came out and supported the initiative, as the turnout from the different churches was very good. He advised that it is something they intend to do again.

In the meantime, organiser of the event, Mrs. Taryn Archibald, Director of Philadelphia Junior Youth Ministry, stated that the youth were properly occupied because they were having fun even as they raised funds for the dedication of the Philadelphia Seventh Day Adventist Church in Tabernacle.

“It is a fundraiser for the Junior Ministry and also right now St. Kitts has an event like the Music Festival and so we were forced to come together and do something that is fun without the loud way-way for our young people, to bring them together and enjoy the food and the company of each other,” noted Mrs. Archibald.