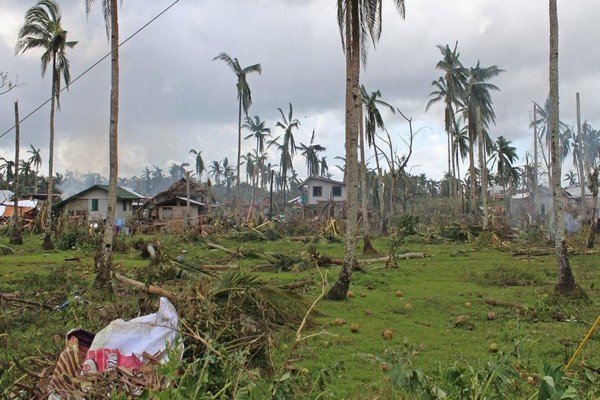 (Sky News) The death toll following the strongest typhoon of the year in the Philippines has climbed to over 200.

At least 208 people were killed, 52 remain missing and 239 were injured, according to the national police.

The toll was expected to rise because several towns and villages remained out of reach due to downed communications, power outages and clogged roads, although massive clean-up and repair efforts were underway with the improved weather.

Many of those who died were hit by falling trees or walls, drowned in flash floods or were buried alive in landslides.

Officials on Dinagat Islands, one of the southeastern provinces first pounded by the typhoon, separately reported 10 deaths just from a few towns.

However, Mr Yap has warned the number of fatalities may still increase as only 42 of 48 mayors in Bohol have been able to report back to him due to downed communications.

A further 10 people have been reported missed and 13 have been injured in Typhoon Rai – which at its most powerful packed winds of 121mph.

In statements posted on Facebook, Mr Yap ordered mayors in his province of more than 1.2 million people to invoke their emergency powers to secure a large number of food packages and drinking water.

He added that it was an urgent problem since water stations were down due to a power outage caused by the typhoon.

At least 227 towns and cities were left without electricity due to the extreme weather event, with only 21 areas since having their power restored, officials said.

The Philippine Coastguard said on Sunday that a total of 869 passengers, drivers, and cargo helpers remain stranded on vessels in Eastern Visayas, Central Visayas, and North Eastern Mindanao and 163 boats are still taking shelter as a precautionary measure.

The country has been hit with landslides and extensive flooding due to the typhoon which rampaged through the central island provinces on Thursday and Friday.

The government said about 780,000 people were affected, including more than 300,000 residents who had to evacuate their homes.

Floodwaters rose rapidly in Bohol’s riverside town of Lobo, where locals were trapped on their roofs and up trees until they could be rescued by the coast guard.

On Dinagar Islands, an official said the roofs of nearly all the houses, including emergency shelters, had been damaged or blown away.

President Rodrigo Duterte flew to the region on Saturday where he promised to provide two billion pesos (£30 million) in aid.

Three regional airports were also damaged in the typhoon, two of which still remain closed.

Unfortunately, such an event isn’t rare in the Philippines, with around 20 storms and typhoons battering the country each year.

The archipelago is located in the Pacific Ring of Fire region, making it one of the world’s most disaster-prone countries.