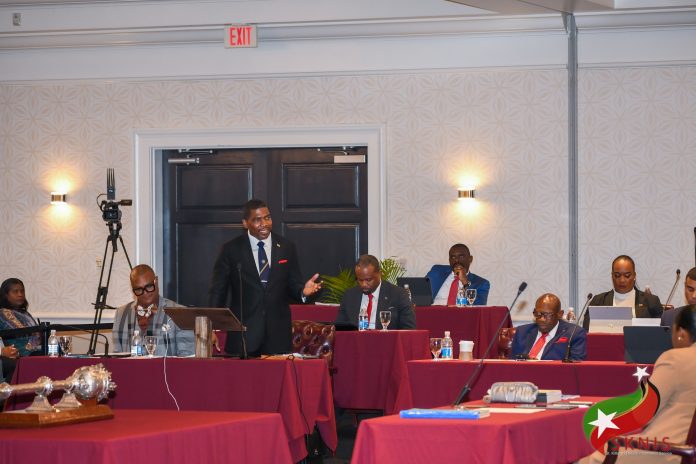 “Madam Speaker 2023 estimates are to a large extent guided by the medium term fiscal framework developed by the Ministry of Finance to help determine a more sustainable fiscal path for the Government over the period 2023 to 2025. Based on that framework our Government is expecting to raise revenue in line with the projected GDP growth rate. The estimates presented here today are therefore forecasting that the fiscal operations of the Government will result in an overall surplus of EC $27.6 million for the 2023 fiscal year and an average of EC $30.7 million over the period 2024 to 2025.

According to the Prime Minister, the government will undertake several capital projects geared towards fostering economic growth and sustainable development.

“The Public Sector investment program reflects the Government’s intention to implement capital projects that will ultimately lead to real economic growth and pave a way for the development of a sustainable island state. In this regard, we are projecting EC $178.8 million from capital expenditure in 2023, while over the medium term outlays are expected to average about EC $165.5 million.”

The Prime Minister and Minister of Finance outlined some measures taken by the Government to bring support and some relief to the people of the Federation following the harsh economic challenges faced during the past two years.

He said the government has disbursed $1.3 million in payment to 64 persons who were affected by the policies of their former employers during the height of the COVID-19 Pandemic.

A total of $5.4 million has been paid to 2,679 Public Servants and  Public Sector workers who risked their lives in service to the country.

Drew added that a review of the Government’s 2021 fiscal performance highlighted how heavily the former Administration relied on the proceeds from the Citizenship by Investment (CBI) Programme to fund the operations of the Government. He said in 2021 inflows from the CBI Programme accounted for 54.9 percent of Total Revenue and Grants and funded 63.5 percent of the Government’s Total Expenditure; explaining that Total Revenue and Grants for the 2021 fiscal year amounted to EC $988.8 million, of which Recurrent Revenue was $970.4 million and Grants were $18.4 million.

The Prime Minister further explained that Non-Tax Revenue exceeded the budget by 106.9 percent, mainly on account of the proceeds from the CBI Programme. “Tax Revenue was 19.8 percent lower than anticipated. The low level of Tax Revenue highlights the prolonged negative effects that the pandemic and country lockdowns have had on individuals and businesses” Drew stated.

As it relates to expenditure, the Prime Minister revealed that the total amount that was spent for the 2021 fiscal year was EC $855.0 million, where EC $701.8 million was related to Recurrent Expenditure and EC $153.2 million was for Capital Expenditure and Net Lending.

Moreover, Outlays for Recurrent Expenditure were 10.0 percent more than the budget, while Capital Expenditure and Net Lending was 20.7 percent below the Estimates.

Dr. Drew informed that the results for Recurrent Expenditure was primarily related to financial support that was granted to some Government Entities and Agencies as well as additional transfers to the Nevis Island Administration to assist with the extra month’s salary payments in December 2021.

Furthermore, “the cost associated with the implementation of the Income Support, Disabilities Support and Fuel Subsidy Programmes, as well as expenditure beyond that which was budgeted for the Poverty Alleviation Programme (PAP) and conducting due diligence on CBI applicants, also contributed to the excess expenditure,” Drew said.

Also mentioned in his Budget Address, Dr. Drew disclosed that at the end of December 2021, “the Total Public Sector Debt stood at EC $1.6 billion or 69.2 percent of GDP, representing a decline of 1.2 percent in absolute terms, but an increase of 1.1 percentage points in the Debt-to-GDP ratio.” He said the increase of the ratio was the result of the estimated contraction in economic activity for 2021 when compared to 2020.”

He also shared that “Forty percent of the debt stock was contracted by the Federal Government and the remaining sixty percent was owed by Public Corporations on St. Kitts and Nevis and the Nevis Island Administration.”

Considering the uncertainties and challenges that confront the global economy, Dr Drew said the Government will develop realistic policies to minimize the impact of exogenous shocks that may arise and affect the Government and people of St. Kitts and Nevis.