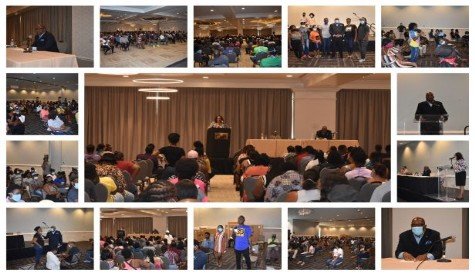 BASSETERRE, St. Kitts, July 15, 2020 (Press Unit in the Office of the Prime Minister) — Prime Minister Dr. the Honourable Timothy Harris spent the most part of Tuesday, July 14 holding discussions with persons employed within the hospitality sector, answering questions on matters pertaining to the future of their employment statuses, as well as options available to them as it relates to their entitlements.

The hospitality sector, which has essentially been closed since March 2020, is one of the industries impacted hardest by the COVID-19 pandemic.

Prime Minister Harris, who was accompanied by Minister of Labour, the Honourable Wendy Phipps, first met with the management and staff of the Royal St. Kitts Hotel where more than 80 employees were affected by the disruption in the hotel sector as a result of the disease.

Later in the afternoon, the government officials met in a similar fashion with the staff of the St. Kitts Marriott Resort. Most of the near 700 persons employed at that development were affected since the advent of the deadly virus.

The hotel employees were given the opportunity to openly express their concerns and have their burning questions answered. Among the concerns raised were the issue of severance and long term gratuity payments, timeline for reopening of the nation’s borders, alternate areas of economic growth that affected persons can be engaged in, and the future of the government’s COVID-19 stimulus package.

In response, the Honourable Wendy Phipps indicated that the government continues to take a managed and informed approach to the reopening of the Federation’s borders to visitors.

“At present, the Government of St. Kitts and Nevis, specifically the Cabinet, is working with the health experts who have been guiding the process through overcoming the COVID-19 pandemic, but at the same time learning to live with the pandemic because we cannot keep the economy closed forever. We have to be able to get back to a state of some sort of normal, in terms of making sure that while we agree that we have to open back the economy so jobs can be had and people can earn a living, the government can raise revenues through taxes so that you can get the services that you expect from government…we want to make sure that it is done in a measured manner so that we don’t find ourselves opening the economy and then having to shut it back down again,” said the Labour Minister.

Moreover, Prime Minister Harris said the challenge now is for hoteliers to adopt new means of operation, much like what local manufacturers have since put in place, that are in strict compliance with COVID-19 regulations and that will keep their employees safe.

The Honourable Prime Minister continued by saying that his administration’s focus is to return the Federation’s economy to the strong position it was in before the coronavirus pandemic.

“The Government is committed to a stronger, safer future and the stronger and safer future means that the government will be with you doing those things that are necessary to keep you safe; that the government will take action that is required to ensure that the economy is open again and that the economy will be healthy and strong enough to create job opportunities for the people who are willing and able to work,” Prime Minister Harris said.

The government officials urged the management of both hotels to hold frank, open discussions with their employees, as well as to facilitate meetings between their affected employees and representatives of the Labour Department.