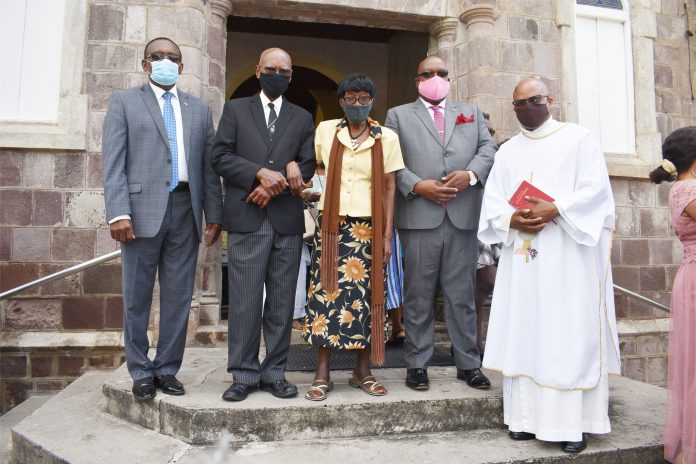 BASSETERRE, ST. KITTS (MMS-SKN) — While congratulating the Catholic Diocese of St. John’s-Basseterre on the occasion of its 50th anniversary, Prime Minister Dr the Hon Timothy Harris has pointed out that the Church has been an important partner in the government’s efforts at socioeconomic development of the country.

“The Church is playing an instrumental role in the development of the country,” said Prime Minister Harris on Sunday January 17 at the end of a special Eucharist celebration for the 50th anniversary of the Diocese of St. John’s-Basseterre held at the Immaculate Conception Co-Cathedral, East Independence Square, Basseterre.

“The Church has been always an important partner in our efforts at socioeconomic development – adding value to the lives of people, providing inspiration, providing a sense of self, and a sense of place in their world,” noted Dr Harris. “And for all that the Church has done in the development of the people, we want to send heartiest congratulations of the Government and people of St. Kitts and Nevis to the Diocese on the occasion of its 50th anniversary and pray that it will continue to grow from strength to strength.”

The Honourable Prime Minister noted that the Catholic Church has a very loyal membership and a wide following, which has been a blessing in many respects. He pointed out that it has a very effective and strong social outreach which has helped in the area of education and has helped many people especially those who have been disadvantaged in one way or the other.

“We meet this morning to thank God for having been with this Diocese for the past 50 years,” said Immaculate Conception Parish Administrator, Father Lawrence Malama, who delivered the sermon. “So we thank the Lord for keeping us, and we ask Him also to guide us as we begin again another year of proclamation of the Word.”

Father Malama told the congregation that with the celebration of the anniversary, the Diocese is celebrating the Church’s contribution to the nation. He observed that many people in St. Kitts went through the former St. Joseph Roman Catholic School, and the St. Theresa Convent School, which have since been amalgamated to form the Immaculate Conception Catholic School. He noted that was one of the contributions made by the Catholic Church.

During the service, Father Malama blessed and prayed for Mr Kenneth and Mrs Dorothy Martin who are celebrating the 63rd anniversary of their marriage.

“My heartiest congratulations to them,” said Prime Minister Harris. “63 years is near a full life – given three scores and ten. For their marriage to have survived speaks of their character, speaks of their commitment to each other, and in life they are role models and they have become role models for citizens and residents of St. Kitts and Nevis. I was happy to have been there to witness them, and to see them so lovingly together.”

Father Courage Dogbey recently of the Archdiocese of Accra, Ghana, who will be assisting Parish Administrator Father Lawrence Malama in the Parish of Immaculate Conception in Basseterre and the Parish of Holy Family in Molineux, read the message from Bishop Robert Llanos who is based in St. John’s, Antigua.

The main Cathedral and the residence of the Bishop are located in St. John’s, Antigua, while St. Kitts and Nevis hosts the Co-Cathedral in Basseterre.

“We are the Co-Cathedral here which also has a seat for the Bishop,” said Ms Hazel. “The Diocese is named after the seat of the Cathedral and the Co-Cathedral and so the other members of the Diocese, Anguilla, Montserrat and the British Virgin Islands are part of the Diocese of St. John’s-Basseterre which was established in January 16, 1971.The Diocese of St. John’s-Basseterre is part of the Province of Castries and the Antilles Episcopal Conference (AEC).”

Accompanying Prime Minister Harris for the celebratory mass for the Diocese’s 50th anniversary, which was also a celebration of the second Sunday in ordinary times, were the Minister of Human Settlement et al the Hon Eugene Hamilton, and Deputy Speaker Senator the Hon Dr Bernicia Nisbett. Also joining in the congregation included past and present teachers of the Catholic schools and their students, and parishioners.