PM Harris; “Election date will be called at the right time.” 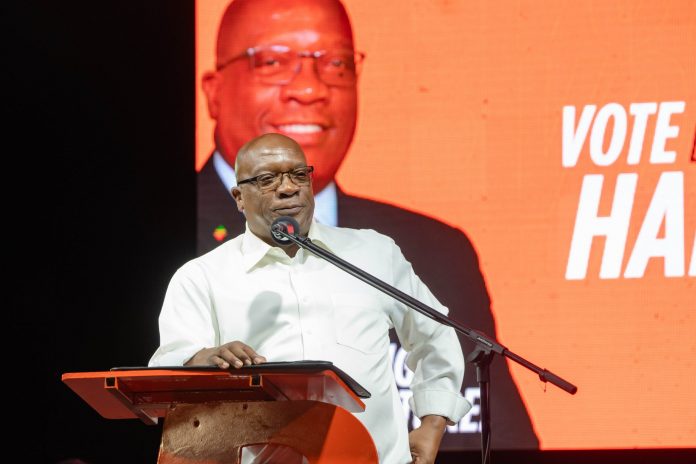 St. Kitts and Nevis (WINN): Leader of the People’s Action Movement (PAM) Shawn Richards on Sunday (July 3) gave Prime Minister Dr. Timothy Harris an ultimatum to call an election date that evening or he would ring the bell on July 6 during PAM’s Campaign Lift Off.

People have been questioning under what authority will Richards announce an election date given his status as the former Deputy Prime Minister since his termination on May 10.

Political leaders and onlookers have suggested that the Prime Minister fired the majority of the Ministers of Government to avoid the hearing of the Motion of No Confidence in the National Assembly that was filed on Monday, April 25, to oust Prime Minister Harris.

Now the Federation is 57 days into the grace period of 90 days offered by the constitution after the dissolution of parliament, and leaders from the various political parties continue to ask Dr. Harris to announce an election date.

However, Prime Minister Harris asserts that the election date will be called at the right time.

“No one other than the Prime Minister of the country can determine when the general elections will be held. All law-abiding citizens will await until such an announcement will be made. What we are hearing are gimmicks, political antics and basically much about nothing because constitutionally, we know when the election must be held, and there’s an outer date in August by which the elections will be held. We will conduct ourselves in accordance with the constitutional ambit and the mandate granted to the Prime Minister in our Westminster democracy. We are a solid and practised democracy; our citizens and residents have nothing to fear. We will contest a clean election and issues bases questions free of all the childishness that we see coming from the leaders opposite… at the right time, we will announce the election date not at the whim and fancy of others but in accordance with the constitutional mandate given to us by the people of St. Kitts and Nevis and in accordance with the Constitution,” said Prime Minister Harris in a video posted on the Peoples Labour Party’s (PLP) Facebook page.

In an invited comment with WINN, Attorney General and Ministry of Justice, Legal Affairs, et al., the Hon Vincent Byron Jr reminded the general public that the constitution is clear on who can call an election.

“My former colleague Shawn is trying to titillate the general public with some ‘politic-ing’, but the law is very clear, the constitution is very clear that it is the Hon Prime Minister, who advises the Governor-General when a writ of election has to be issued… I understand that my friend Shawn Richards could tease the public and say he will ring the bell, but clearly, that is the call of the Prime Minister, Dr. Timothy Harris; he would determine when it is within the 90 days from when the parliament was dissolved that we would have a general election.”

AG Byron shared that nomination day is at least seven days before polling day, according to the National Assembly Elections Act of 2017.

While some people have been taking this announcement to mean that Richards would announce the election date, Azard Gumbs, Deputy Chairman of the PAM, explained the comment was a symbolic gesture to show the PAM leader’s understanding of the people’s desire for the election date.

“If you were to conduct a poll and ask persons whether or not they are ready for the bell to be rung, I could guarantee you that at least eight out of ten persons in St. Kitts and Nevis [are] ready for the election to be called. And so the Hon Shawn Richards being the leader that he is [sympthizing] with the people of St. Kitts and Nevi, is symbolically ringing the bell if needs be to show that he is a man who understands the people and who sympathises with the people and who to share the same concern that the bell ought to be rung, that the people of St. Kitts and Nevis, that we are ready to hear the election [date]; the People’s Action Movement is ready to contest the elections, and I think that the other parties are equally ready to contest the election as well… the Prime Minister; we understand that he has a constitutional mandate up to August 8, but if you are to listen to the majority of the people on the ground, I think most of us are ready for the bell to be rung and for elections to be had,” shared Azard Gumbs, Deputy Chairman of the People’s Action Movement, on the July 6 broadcast of Voices on WINN.