PM: With The Opening of The New Newcastle Police Station, Government Is Putting Officers’ Health First 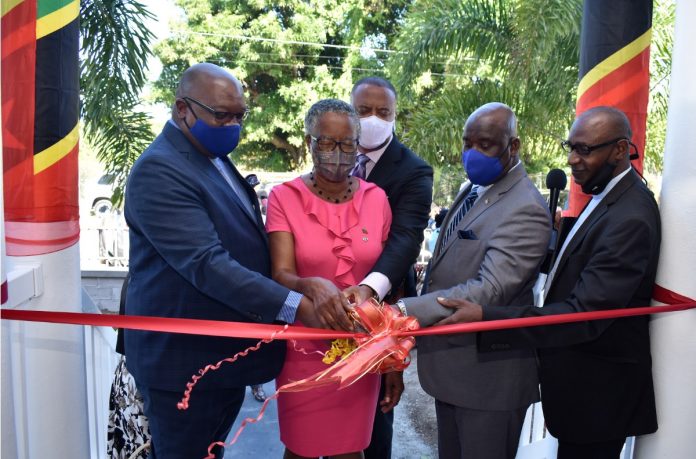 BASSETERRE, St. Kitts, December 03, 2020 (Office of the Prime Minister) – With the opening of a modern Newcastle Police Station and Fire Unit, the Nevis Island Administration and, by extension the Team Unity Government of St. Kitts and Nevis, have demonstrated their commitment to the health and safety of the men and women of the nation’s security forces.

That’s according to Prime Minister and Minister of National Security, Dr. the Honourable Timothy Harris, when he delivered remarks at the opening of the modern Newcastle Police Station and Fire Unit on Nevis earlier today (Thursday, December 03).

“The health and safety of our security forces, and in this case, our law enforcement officers, as well as our fire officers, had been recognized and continue to be recognized as an essentially important factor in our crime mitigation and prevention strategies, but more so, as a basic human and workers’ right,” Prime Minister Harris said.

The need for a new structure became necessary when, in 2016, the Government made the decision to close the Newcastle Police Station as it had been deemed to be in very poor condition and posed a serious health risk to the men and women of the Royal St. Christopher and Nevis Police stationed there.

Prime Minister Harris said shortly after assuming office, his administration undertook a systematic assessment of the crime and criminality situation in the country.

“As part of that assessment, we became aware of the deplorable conditions of the building that this edifice now replaces. But this was not unique. Similar situations were found at the stations in Old Road, in Sandy Point and St. Pauls in St. Kitts.

These conditions were not just deplorable but had reached an embarrassingly dangerous level. The Federal Cabinet took the decision to close a number of these stations for the health and safety of all,” the prime minister said.

“We were cognizant of what seemed to be lost on our predecessors that poor accommodation, outdated and/or mal-maintained equipment and technologies would negatively impact the morale of our men and women in uniform and could even adversely affect recruiting of new police officers,” Dr Harris added.

As a result of the strong cooperation between the Nevis Island Administration and the Federal Government, the construction of the multi-million dollar Newcastle Police Station and Fire Unit was realized.

Thursday’s opening ceremony was also attended by Deputy Governor-General, Her Honour Mrs Hyleeta Liburd; Premier of Nevis, the Honourable Mark Brantley and other members of the Nevis Island Administration, as well as the Permanent Secretary in the Ministry of National Security, Mr Osmond Petty; Commissioner of Police, Mr Hilroy Brandy; Fire Chief Mr Everette O’Garro and officers of the Royal St. Christopher and Nevis Police Force. Mr Andrew Skerritt, Permanent Secretary in the Office of the Prime Minister, was also present.
-30-