Police Lineage Runs Deep In The Graduates of Course No.44 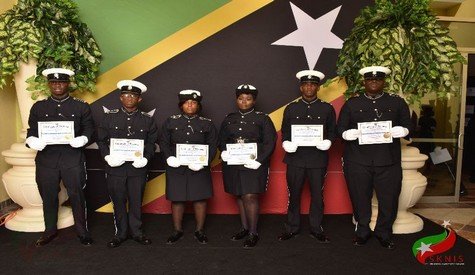 Basseterre, St. Kitts (SKNIS): Twenty-five young men and women graduated from the Police Training School on Thursday, July 09, 2020, embarking on a career in law enforcement with a pledge to serve and protect.

An intriguing statistic from Course #44 points to a very positive trend for the Royal St. Christopher and Nevis Police Force and the country. Eight of the new officers have at least one parent or a sibling who are members or former members of the RSCNPF.

They are as follows, #388 Woman Constable Chieyenne Clarke – her father has 28 years and counting in the force while her mother served for some 12 and a half years; #392 Zomiah Hutchinson – his father is an officer for 27 years; #398 Constable Dashan Jacobs – his father is an officer for 21 years, his mother 22 years, and his brother 10 years, while #403 Woman Constable Laricia Ottley – her father served more than 18 years. There is also #405 Constable Zedan Clarke-Lake – his mother is an officer for 22 years, #406 Shane Clarke – his sister has six years under her belt; #409 Therese Gordon – has a father who served more than 15 years, and #415 Kelly-Ann Francis has a brother who continues to serve after 13 years.

PC Hutchinson and WPC Clarke said that they were inspired to join the force because of the actions of their loved ones.

“He is always polite, always very professional,” Hutchinson said of his father’s positive attitude. “I looked up to that, and it was a deciding factor in me joining the police force.” The 20-year-old added that he tries to emulate his father’s actions, whether he is on or off duty.

WPC Clarke stated that her father is well respected in the community and commands respect. She said, “I want to make certain people respect police again.” This is based on several incidences at the ferry terminal where some persons would openly swear in spite of the presence of a police officer. The 24-year-old said that this was unacceptable and after experiencing such, intervened and spoke to the individuals. “One person can make a difference,” Clarke said, adding that she will be a force for good.

Constables Clarke-Lake and Jacobs are excited by the opportunities for personal and professional growth that comes along with being a police officer. Clarke-Lake is 19-years-old and has represented St. Kitts and Nevis overseas as a member of the junior volleyball team. He explained that he is interested in pursuing a career in ballistics, which may lead to advanced training overseas.

Jacobs, 18, said that he spoke to his mother about the opportunities for professional development and is convinced that the experience will help to further his desire to learn more about technical engineering. He added that he is committed to the RSCNPF and is excited to serve.

Constable S. Clarke joined the Cadets in 2011, and it lead to him joining the St. Kitts-Nevis Defence Force in 2017. While there, he worked alongside the police on joint patrols and felt compelled to transfer his service.

“I just like helping people,” he stated, adding that a police officer interacts directly with the public daily. The 20-year-old added, “I love the tactical operations, and I am ready to make a difference.”

Clarke noted that police training has made him mentally tough, and he is prepared to help de-escalate and defuse challenging situations. WPC Ottley shared similar sentiments.

“Training school was challenging and hectic, but I was motivated to learn,” the 23-year-old said. “Now that I have graduated, my intention is to climb the ladder. I still have a lot to learn, and each day that I am out there will be a new experience to learn. I want to be out there to assist residents and help them to be comfortable around the police.”

Inspector Shorna Edwards, Commandant of the Police Training School, said that to her knowledge this is the first time that so many persons with such a direct lineage to policing have been a part of the same course. Incidentally, there were other recruits who had uncles, aunts and cousins in the force.

“We (individuals) model what we see,” Inspector Edwards indicated, noting the positive influences that motivated the recruits to join the police force. She said that “it means that they have a lot to contribute to society.”

Inspector Edwards noted that she has high hopes for the graduates of Course #44.