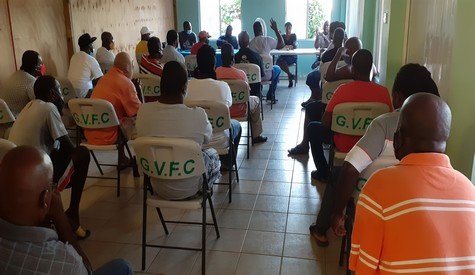 Basseterre, St. Kitts (RSCNPF): Senior representatives from The Royal St. Christopher and Nevis Police Force, the Ministry of Transport and the Public Works Department, made themselves available on Sunday, September 06, to meet with members of the East Line Bus Association.

The meeting, which was held at the Cayon Community Centre, was organised by the Association. It was chaired by the Association’s President, Jefferson Pemberton and just over thirty members attended. They aired their concerns regarding a number of issues, chief among them being the lack of adherence to the designated bus routes and bus stops by other bus drivers, as well as manoeuvring inside the East Line Bus Terminal.

The drivers had the listening ears of several key officials – Permanent Secretary in the Ministry Tourism, Transport and Ports, Carlene Henry-Morton, Commissioner of Police Hilroy Brandy, Assistant Commissioner of Police with responsibility for Operations, Adolph Adams, Head of the Traffic Department, Superintendent Trevor Mills, Roads Engineer at the Public Works Department, Zekey Hazel, as well as Officer Donaly Chiverton-Liburd. They, too, shared concerns they had with the way bus drivers were operating.

A healthy discussion to thrash out the issues took place and the persons present agreed that the meeting was fruitful. Several determinations for the way forward were made. A follow up meeting with the heads of all Bus Associations is expected to follow.

Mrs. Henry-Morton, who recently had the Ministry of Transport added to her portfolio, described the meeting as a learning experience. She noted how passionate the drivers were when they spoke about their challenges and she asked that they exercise patience as all parties worked together to improve the overall situation. She also thanked those who were complying with the law.

The Police also committed to addressing the areas under their purview. Commissioner Brandy spoke about actions he had already taken to have some of the matters addressed. He went on to explain what additional steps would be taken, going forward, to ensure the smooth running of the East Bus Line.