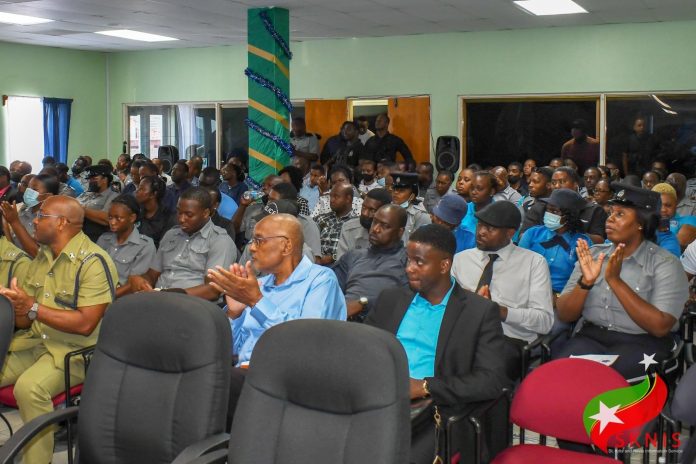 St. Kitts and Nevis (WINN): The rank and file of the Royal St. Christopher and Nevis Police Force were engaged in a special lecture on Tuesday morning (August 16) with the newly elected Prime Minister and Minister of National Security, the Hon. Dr. Terrance Drew. He met with the officers for the first time since the August 05 National Assembly Elections.

The officer said, ” Sir, I have a situation that is very disturbing to me. It is even now affecting my mental [health]. Late last year a notice was sent out for persons to apply for promotion for the rank of Corporal of Police. I applied and went through the interview process. From reliable sources, know that seven of us passed the interview process and only four were promoted, leaving three of us. The three of us who were not promoted did better than some of those who were promoted.”

When I questioned why I and the others were not promoted, I was told it had something to do with vaccination. I was against taking the vaccine all along and they told me that my name was on the list to be promoted but I have to be vaccinated. Sir, this is very, very demoralizing for us and the Police Force.”

WINN FM contacted Joseph Liburd to address the matter. He confirmed that he, Govia and Browne indeed conducted the interviews. Liburd said personally, upon conducting the interviews, he did not know of any vaccine requirement for the officers seeking promotion.

In response to the officer’s claim, Prime Minister Drew said he will review the official policy position for the Ministry of National Security to see the contents as it relates to mandatory vaccination.

“Let me tell you my position. I’m a doctor and I have no problem with vaccination. You all know that; but you know I was also in the fight to protect people’s rights. If that was a policy position of a previous Government, the [Permanent Secretary] or whoever might have been following direction; so I would like to see that policy position if you were told that by a high-ranking police officer. This cannot be a position by word of mouth. This can really be a borderline human rights violation and those have to be taken very seriously. So those have to be put into firm policy so that you can be satisfied that this is the direction even if you agree or disagree, said Prime Minister Drew”

Present at the lecture was Mr. Osmond Petty, Permanent Secretary in the Ministry of National Security. He revealed that there was no official written policy barring the officers from being promoted, but indicated the decision was handed down from the Minister in charge at that time.

Petty said, “There is or was no policy about vaccination. The procedure for approvals for promotion is that the final approval comes from the Prime Minister- the Minister of National Security and it was the decision of the then Prime Minister ( Dr. the Hon. Timothy Harris) that persons for promotion should be vaccinated. So there is no written policy and there is none. It was simply a decision of the Prime Minister of the day. So, I would have passed on that information to the Commissioner of Police and it’s not just for Corporals, it was for anybody who was to be promoted and not vaccinated, and they did not get approval. So, Prime Minister [Drew] there is no policy in place.”

Meanwhile, Prime Minister Drew used the opportunity to commend the officers for their continued hard work and dedication in service to the Federation of St. Kitts and Nevis. He also pledged to support and provide the necessary changes and improvements that may so benefit and motivate all officers in the Royal St.Christopher and Nevis Police Force.