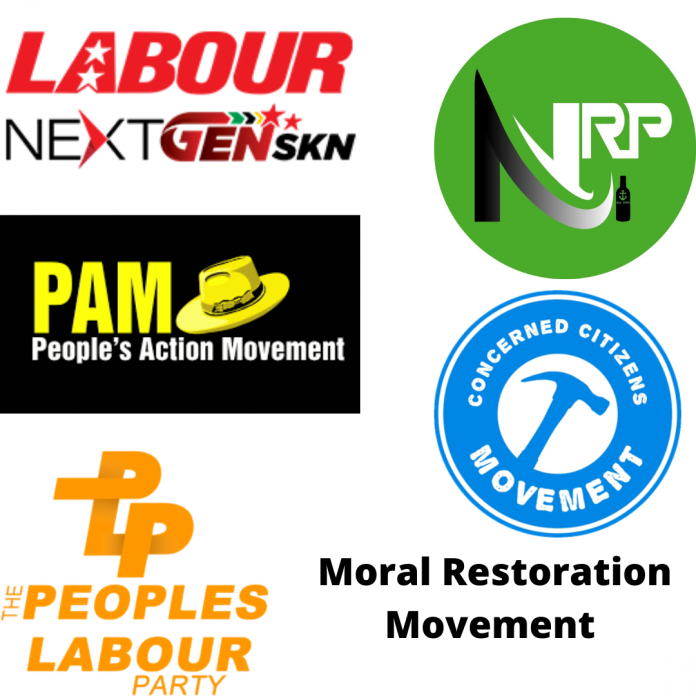 St. Kitts and Nevis (WINN): All six leaders of the political parties participating in the next general election have signed and endorsed the Ethical Guidelines and Code of Conduct shared in June by the Coalition of Non-Governmental Organisations (NGOs). 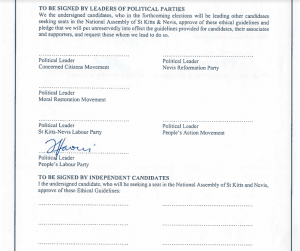 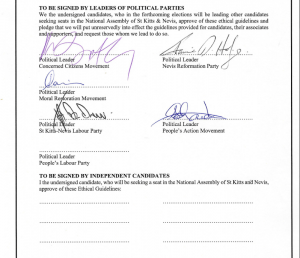 The purpose of the Code of Conduct is to ensure the election expected within a month is free and fair in the election process and was done in past elections; initially issued in 1993 and revised in 1995, 2009, and 2015.

According to a press release shared July 4 from the St. Kitts and Nevis Chamber of Industry and Commerce, all leaders endorsed the document as of June 27, 2022.

Some of the expectations in the Code of Conduct asked candidates to focus on issues/policy rather than personalities. To avoid the defamation of the character of their opponents and avoid abusive language or innuendos.

The Electoral Commission should be transparent and impartial and invite independent election observer missions.

The voters are encouraged to exercise their right to vote. The guidelines also asked voters to refrain from accepting gifts and/or bribes in return for a vote.

The media was reminded to allow equitable access to all candidates and report on campaigns honestly, impartially, balanced and fair on all parties vying for office.

The calls for an election date continue. On July 1, the St. Kitts Nevis Labour Party hosted a freedom march urging the Prime Minister to call an election date. Supporters of the People’s Action Movement were also in attendance at the march.

In a Facebook post on July 3, the leader of the People’s Action Movement (PAM), Shawn Richards said to Prime Minister Dr Timothy Harris to “Ring the bell now…otherwise.”

The post further stated that the Prime Minister has “ran out of time in naming the election date” and that “he has no more room and time to play with.”

The post ended by suggesting that Richards, during PAM’s Campaign Lift Off on July 6, will ring the bell.

According to Part 3 – Summoning, Prorogation And Dissolution, Section 48 of the Federation’s constitution named “Holding of elections”, sub-section one states; “A general election of members of the National Assembly shall be held at such time within ninety days after any dissolution of Parliament as the Governor-General may appoint.”

As of July 5, it has been 56 days since the dissolution of parliament and the firing of six government ministers. The Prime Minister has 35 days left to call the election.