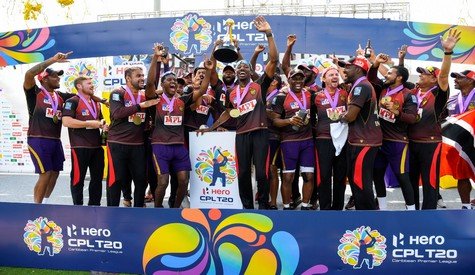 Pairing up with the score on 19-2, Simmons and Bravo weathered the early storm and blossomed beautifully towards the end to take TKR home. They added 138 runs in 14.4 overs to secure a 12th successive win for TKR and their fourth CPL title. Simmons finished with 84 not out off 49 balls including four sixes and eight fours. Bravo hit six sixes and two fours in an unbeaten 58. Simmons finished the tournament with the most runs—356, while Bravo was third with 297.

Afterward, Pollard, who scored 207 runs, took eight wickets and hit 20 sixes during the series, said he was very pleased with the title-winning effort.

“Great, a great feeling. We have worked really, really hard. When we sat in the dressing room last year, you could have seen the disappointment (after losing in the semi-finals). We had rigorous conversations and the mentality the guys came through even before the camp, this was destined to happen. They always wanted to improve every game. Total, total team effort,” Pollard said.