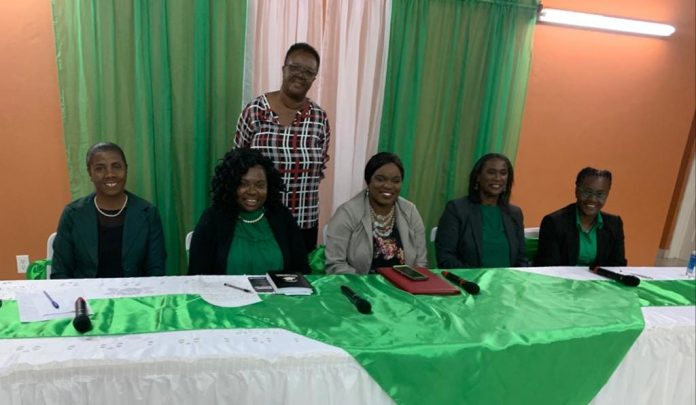 (PRESS RELEASE) — The celebration of International Women’s Day continued on Nevis with dynamic women within the Nevis Reformation Party (NRP) being featured on a panel discussion on Thursday, March 18 at the Franklyn Browne Community Centre.

Moderated by Dr. Andrea Bussue, Chairperson of NRP’s Women’s Arm, the discussion featured a conversation surrounding the life journey of the panelists where it was revealed that positive family values and strong role models are to be credited for their successes.

Political Leader of the NRP, Dr. Janice Daniel-Hodge reminisced on the life lessons and values that her father, the late Right Excellent Dr. Sir Simeon Daniel, instilled in her. She attributed her successes today to him, noting that he taught her that “no one should determine your destiny, we are all equal, we should treat others the way we would want to be treated.”

Hon. Cleone Stapleton-Simmonds, the NRP’s Deputy Leader and Member of Parliament for Nevis 5 said the most influential person in her life was her grandmother.

“She had an amazing source of strength and she was actively involved in the community, particularly Cotton Ground, so from her, I learned qualities such as serving and representing people,” Stapleton-Simmonds said, adding that her grandmother was “very dedicated, committed, and loyal.” “Those are values that I took with me throughout my professional career, and thus explains my strong sense of determination and purpose,” Hon. Stapleton-Simmonds said.

Public Relations Officer of NRP’s Women’s Arm, Communications Specialist, and aspiring politician Ms. Jaedee Caines ascribed her successes in life to her mother, Ms. Jean Caines, as she stressed the importance of being okay with one’s imperfections.

“She has shown me that it is okay to not be perfect. Sometimes we go through life thinking that everything should be perfect…all the I’s dotted and T’s crossed, and just by the very nature by which I came into this world – being the product of teenage parents – yet making it this far and doing pretty okay albeit I still have a long way to go – is the reason for this admiration,” Caines explained.

Ms. Willett, who is the daughter of Leeward Islands Cricket Legend Mr. Elquemedo Willett, said “my father has many attributes I would like to emulate and master” adding that “the one I would prefer or most likely want to master is his determination. He would say things like ‘stick to the fight when you’re hardest hit’ and ‘success doesn’t come easy. Because of his determination, he was able to break barriers and pave the way for cricketers, so I too would want to break barriers in the near future.”

Retired civil servant, accomplished Veterinarian, and aspiring politician Dr. Patricia Bartlette weighed in on the conversation by also thanking and showing appreciation to her father for his influence in her life.

“My father made an impact on me in a positive way… We grew up poor, but we were poor and polite and so the politeness that I now use, I got most of that from my dad. He is the foundation of who Patricia Bartlette is today,” she explained.

The NRP made history in September 2020 by becoming the first political party in the federation of St. Kitts and Nevis to elect a woman as its leader. The Executive of the 50-year-old political party is also dominated by women from all walks of life.