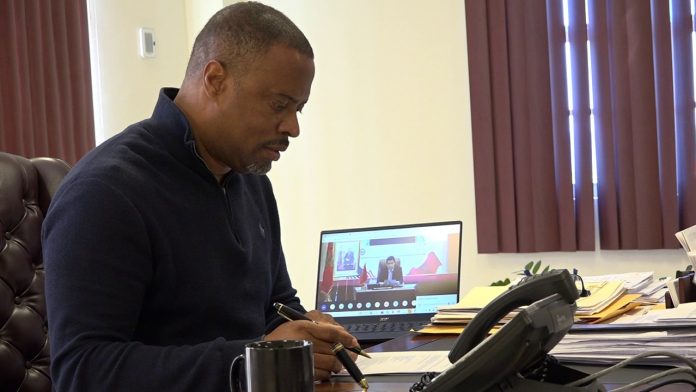 Premier Brantley began seeing members of the public on Friday, January 15, 2021, instead of the usual Thursday consultations. This was the first of his weekly consultations since taking a brief hiatus over the 2020 Christmas season.

“The idea really is to give people as much access as possible to the Premier and for them to have an audience and an ability to speak to me… That is part and parcel of what we’ve tried to do in terms of our good governance agenda – accessibility, ensuring that our people have access to the Premier, the highest office on Nevis and that persons have the ability to air their grievances, air their concerns, and often times bring their suggestions.

“People come for a variety of reasons. I have some people who simply come to pray for me, some people who come to talk to me and tell me about their children or their grandchildren. So it’s not always people coming with a problem. Sometimes people just want an audience and an opportunity. I think in our democracy and how we practice it, that is a very good thing.”

He said on average he would see upward of 20 persons over the course of the day, discussing issues that cut across several ministries.

“For several years, since 2013 when I first entered government, I’ve designated Thursdays as my one-on-one. What I do is meet with anybody who wants to meet. People can come without an appointment and I’m proud to say that I’ve done that over the last seven years.

“Since I became Premier in 2017, I’ve continued that tradition. People come in large numbers sometimes to meet with me on a variety of matters; in fact, people have come from as far away as St. Kitts on a regular basis to meet with me on a number of issues… We hear what your concerns are and try our best to resolve them,” he said.

The Premier’s one-on-one consultations will continue every Thursday. Persons needing urgent meetings can schedule an appointment on any week day.