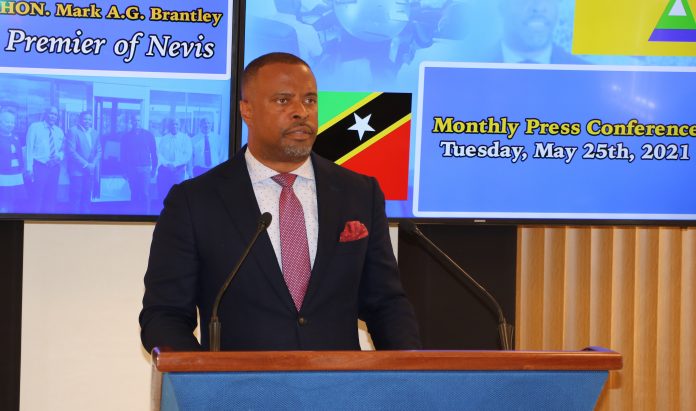 He was at the time responding to a reporter’s question on the issue during his monthly press conference on November 25, 2021.

“The Federal Government, you say, provided over $371 million to the NIA. I first want to say that that is not true; that is false. …The number of $371 million is inaccurate; the NIA has never received $371 million.

“Why do I say that is false is because the Prime Minister Dr. Timothy Harris would have made certain statements which I recognize has gained some currency in the public sphere, but a significant part of this $371 million figure never came to the NIA.”

He went on to explain, “I believe the Prime Minister said that included in that was monies he said was paid for things like economic costs for students-that will be paid to [University of the West Indies] UWI by the Federal Government; STEP workers; he mentioned PAP, the Poverty Alleviation Program; none of that money would have come to the NIA.”

The Premier and Minister of Finance in the NIA pointed out that those are programs that would have benefitted both islands and as such the Prime Minister had apportioned a value to what was spent on individual recipients on Nevis.

The actual budgetary allotment received by the NIA over the past 7 years he said, was approximately $260 million. This was backed by Prime Minister Harris at a press conference on October 28, 2021, who said, “over the last six years plus, our budgetary transfers to the NIA have exceeded $260 million.”

Premier Brantley indicated however that Nevis is still pursuing its fair share of Citizen by Investment (CBI) receipts, a matter that has been discussed at the Federal Cabinet over the years.

“The number that we had that we have looked at and that has come to the NIA is more in the order of $260 million. That is money that the NIA would have received…and whilst we are absolutely grateful that we’ve received something, we continue to make it very clear that this is nowhere near a fair share of the CBI resources that we have always said should be shared equitably; and I don’t say equally because St. Kitts is much bigger that Nevis, we can’t expect an equal share, but we expect an equitable share,” Premier Brantley stated.

The Charlestown Accord, signed by leaders of the three coalition parties and which formed the fundamental basis of Team Unity, spoke to the CBI proceeds being shared on a pro rata population basis. The Premier noted that since Nevis has one third of the Federation’s population, it is expected that the island would receive one third of the CBI monies, however that is not the case presently.

“In fact when we have done the math, less than ten percent of the money from the Citizenship By Investment program is flowing (to Nevis) … So the situation is way better than it has ever been, but way better does not mean there is not room for further improvement.”

A resolution of this issue remains outstanding between the NIA in Charlestown and the Federal government in Basseterre.