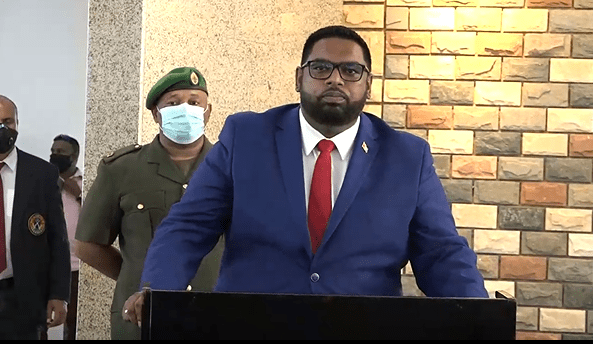 (Demerara Waves) President Irfaan Ali on Thursday said he boycotted this week’s first-ever National Conversation because the government was not involved in planning the event and selecting the panelists, concerns about decision-making and silence by that constitutional body about the five-month long political crisis over the elections.

“Every single stakeholder in Guyana agrees that democracy was under threat but the ERC did not issue a single statement. The ERC went hiding,” he told reporters at State House shortly after conferring Senior Counsel on three Attorneys-at-Law. He pilloried that commission for failing to “stand up and to recognise when there is wrong”, in clear reference to the controversial declarations of the Region Four Returning Officer’s declaration of results for that district and five-month long wait of a declaration of final results based on the figures from the national recount of votes cast on March 2, 2020. The international community and foreign observers had expressed concern about the tabulation process for the Region Four results.

In March 2020, the ERC had welcomed the decision by then President David Granger and then Opposition Leader Bharrat Jagdeo to recount the votes. In June and July, 2020 that body had also urged Guyanese to behave responsibly and to respect the declared results.