Primary Schools Football Tournament is back on Nevis

St. Kitts and Nevis (Sports Page) – After a two-year hiatus due to the covid -19 restrictions, the Primary Schools’ Football tournament is officially back.

The tournament was officially declared open on Wednesday 19th October at the ET Willet Park, by Minister of Sports, Hon. Eric Evelyn.

Prior to the declaration by Minister Evelyn, the impressive ceremony featured the following:

The invocation was done by Pastor Otis Browne and the national anthem by student at the Elizabeth Pemberton Primary School, Jaiida Gilfillan. 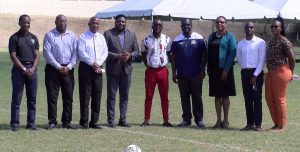 Minister of Education, Hon. Troy Liburd, also admonished the children to play the game hard, but fairly and to use the opportunity to make new friends.

The officials’ oath was presented by Referee Ulinda Warner and the players’ oath was done by Elizabeth Pemberton Primary School’s student, Kiyan Blake.

Closing remarks and the vote of thanks, were done by Director of Sports, Jamir Claxton. 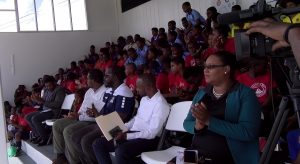 star Footballer and athlete, Andre Browne, who performed the ceremonial goal kick, to start the tournament, leaving Permanent Secretary in the Ministry of Education, Mr. Kevin Barrett, flat footed in the goal.

Four matches were played immediately after the opening ceremony and by the look of things and the response from members of the general public, it will be a keenly contested and much appreciated tournament.