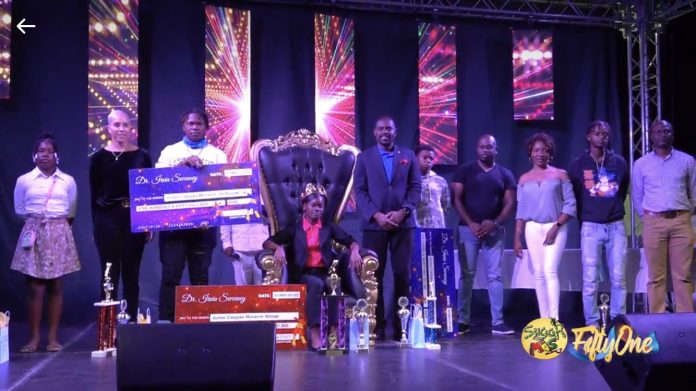 St. Kitts and Nevis (WINN): Six Junior Calypsonians faced off in competition on Friday night, December 09, 2022, at the Berkeley Memorial (The Circus) in the heart of Basseterre.

The St.Kitts-Nevis Junior Calypso Monarch competition only featured young competitors from Nevis- four males and two females; of them were two pairs of siblings.

At the end of the competition, Shante “Princess Neveah” Hendrickson copped the SKN Junior Calypso Monarch title with 227 points.

In second runner-up with 212 points was Dequon Hendrickson, who carries the stage name “Dequon”. The 13-year-old had his first competitive Calypso experience in 2019, where he placed 2nd-runner-up.

The Junior Calypso competition has been a marquee event on the St. Kitts-Nevis National Carnival Calendar since 1973 and has paved a successful path for Calypsonians such as De King Sweeney, who adopted the competition for the next three years, beginning with Sugar Mas 51.