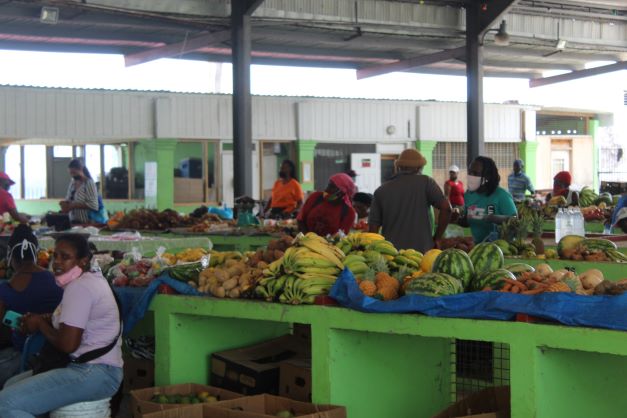 Basseterre, St. Kitts (SKNIS): The Public Works Department has committed to quickly fix leaks and drainage problems at the Basseterre Public Market following heavy rains that caused flooding at the facility on August 4.

Director at the Public Works Department, George Gilbert, said, “What we are saying here is there are some skylights in the roof and around the skylights, there is some corrosion, and it appears as if that is where the water came from this morning.”

He continued, “What we are going to do is have some discussions with the permanent secretary and director for the market and we are going to find out exactly what is the intention in the short term, the medium term, and also in the long term for the development of the market in terms of the rehabilitation work.”

He said that the Ministry of Public Infrastructure is going to make a rapid turnaround to make the people of the market feel as comfortable as possible.

“There are drainage systems around the perimeter of the market, and it appears as if during the heavy rain this morning, those drains were blocked and it caused the floor of the market to be flooded,” Director Gilbert said. “It appears as if there was garbage in those drains, which caused the water backup, so one of the things we are going to ensure is that the drains are suitable, and if they were not the adequate size, we would actually upgrade the size of them to the adequate size.