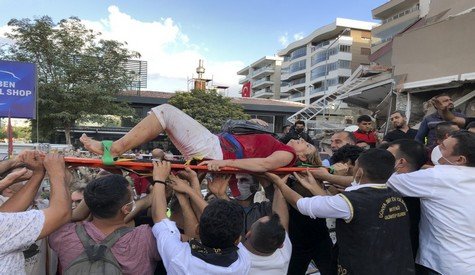 ISTANBUL (AP) — A strong earthquake struck Friday in the Aegean Sea between the Turkish coast and the Greek island of Samos, killing at least 14 people and injuring hundreds amid collapsed buildings and flooding, officials said.

A small tsunami struck the Seferihisar district south of Izmir, the city in western Turkey that was the worst affected, said Haluk Ozener, director of the Istanbul-based Kandilli Observatory and Earthquake Research Institute.

At least 12 people were killed in Izmir, Turkey’s third-largest city, including one who drowned, and 419 were injured, according to Turkey’s Disaster and Emergency Management Presidency, or AFAD.

On Samos, where a tsunami warning was issued, two teenagers died after being struck by a wall that collapsed. Greek Prime Minister Kyriakos Mitsotakis tweeted condolences, saying “Words are too poor to describe what one feels before the loss of children.” Another eight people were reportedly treated at the local hospital for light injuries.

Izmir Gov. Yavuz Selim Kosger said at least 70 people were rescued from wrecked buildings, with four destroyed and more than 10 collapsed. Others suffered less severe damage, he said, but did not give an exact number.