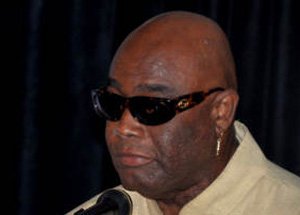 Prime Minister Dr. Timothy Harris described Mr. Thomas as having a ” strong personality and passion for politics – and for life – imbued his outstanding journalism career with authenticity, intensity, originality and a quest for justice.”

A statement from the Office of the Prime Minister said Mr. Thomas had an ongoing battle with kidney disease.

Dr. Harris added: “He was truly inimitable, not only in his witty style of questioning at press conferences but also in the substance of his work, which covered subjects of national interest, notably health care and law and order, with dogged persistence and determination that redounded to the benefit of his listening audience and the nation at large. ”

“On a personal note, Val T was a valued friend and advisor, who was cherished for his unvarnished opinions that provided keen insight and analysis with an eye toward facilitating the building of a stronger and safer future for his fellow citizens and residents of his beloved country,” the Prime Minister stated.

He added that the media community had lost an inspirational leader and mentor.