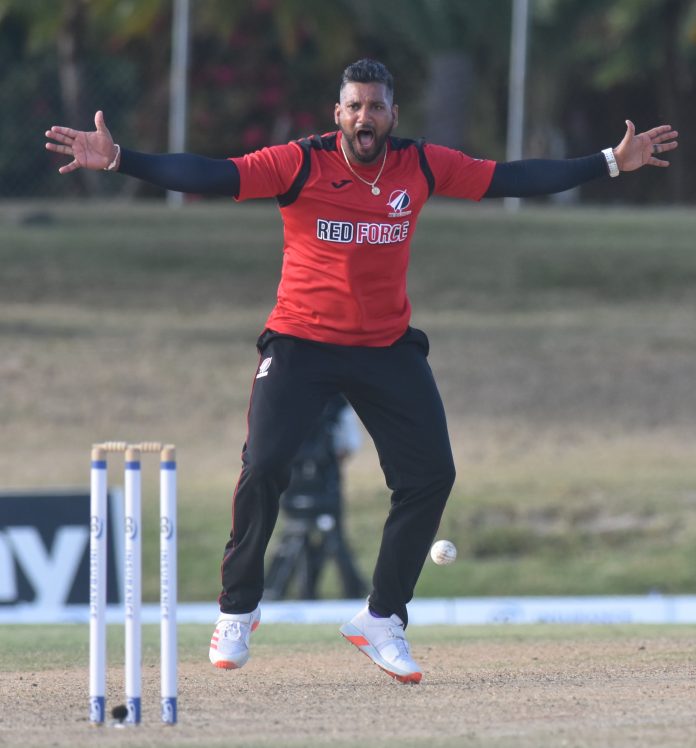 The experienced Rampaul demonstrated great control in the first 10 overs of the innings and returned for an even more impressive second spell as Red Force limited Scorpions to 255-7 off their 50 overs – only 58 runs came from the last 10 overs as four wickets fell.

Rampaul now has 295 wickets in his List A career – this was the 21st time he has captured four or more wickets in an innings. He was named the CG Insurance Man-of-the-Match for the second time in the tournament.

Asked to chase 256 for victory under lights at Coolidge Cricket Ground, Red Force showed their batting depth and strength to win with 47 balls to spare and maintain their six-match unbeaten run. Opener Lendl Simmons provided an excellent platform with 68 off 70 balls while Nicholas Pooran made 54 not out off 40 balls.

Jason Mohammed also played well for 41 off 71 balls and is now the leading batsman in the tournament with 326 runs at an average of 81.50 per innings. Near the end and with victory in sight, captain Kieron Pollard showcased his amazing six-hitting power as he cleared the boundary five times en route to 36 not out off just 18 balls.

“I thought it was a total, total team effort. The way that the experienced bowler Ravi Rampaul came to the fore … just sticking to basic lines and lengths,” Pollard said. “We knew once we kept them to under 260 with our batting line-up although we played a batsman short, we could try to overhaul that target. So well done to the players, Simmons showed his class, Mohammed continued with runs and Pooran got some runs behind his name.”

Earlier, opener John Campbell, in his first match since returning from the West Indies successful Test tour of Bangladesh, topscored for Scorpions with 88 off 131 balls. He added 108 for the second wicket with Brandon King (58) and then 58 for the third wicket with Andre McCarthy (35).