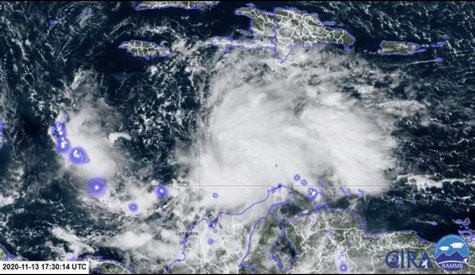 St Kitts and Nevis (WINN)The weather throughout the Caribbean has been far from quiet over the past few weeks, starting with torrential rain in the Greater Antilles area caused by tropical storms ZETA, ETA, and separate weather systems.

Steady rainfall in the federation led to running ghauts, the temporary use of the new road built as part of the Old Road Bay rehabilitation project, and the unfortunate displacement of people who saw their lives upended as a result of a landslide that moved a three-story residence in Fort Tyson, Frigate Bay. Authorities have deemed the area as unstable and a public hazard.

Fort Tyson remains closed off to the general public Saturday, according to a statement from NEMA.

According to Meteorologist Elmo Burke of the St. Kitts Met Office, the weather system that affected the federation, as well as Antigua, has left our immediate area and has developed into Tropical storm Iota.

This year’s Hurricane Season continues to break the record of 28 named storms set in 2005.