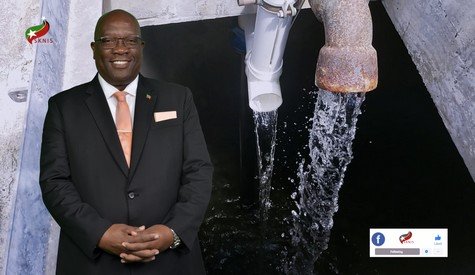 BASSETERRE, St. Kitts (Press Unit in the Office of the Prime Minister) – The Dr. the Honourable Timothy Harris-led Team Unity administration is committed to bringing a permanent solution to the longstanding issue of unreliable water supply that continues to affect residents of Cayon – an issue that transcended different administrations over the years.

“For us, this is going to be a defining moment in terms of the legacy of Team Unity in resolving a problem that has been perennial or longstanding,” Prime Minister Harris said while responding to a question posed by a resident on the most recent edition of Leadership Matters on Tuesday, August 18.

Dr. Harris reflected on his time of attending the Cayon High School as a young man and recalled how often that community would lose its water supply even then. He added, “This problem has been a protracted one that has gone beyond all administrations to date. Team Unity will make the difference and we will resolve this problem whether through well drilling…we have also contemplated building a desalination plant, all with a view to addressing this matter.”

Prime Minister Harris said the delivery of an adequate supply of water for the people of Cayon would be a meaningful contribution to the brighter, safer future his Team Unity administration is building in St. Kitts and Nevis.

The Ministry of Public Infrastructure is currently exploring several temporary solutions for the issue – such as looking into alternative water sources or wells – while the Government considers a long term fix.

Deputy Prime Minister and Minister of Public Infrastructure, the Honourable Shawn Richards, while providing an update on alternatives being explored by his ministry, noted that Shadwell 2, which refers to a well in the Shadwell area, was being considered as a possibility for bringing temporary relief to the situation in Cayon.

The deputy prime minister noted however that tests were done locally at that well which showed the quality of the water there was not up to par for consumption.

“Samples were also sent overseas to a lab in Miami and also to the CARPHA lab in Saint Lucia for further testing. On the weekend the Bureau of Standards received the results from those two labs overseas. The labs overseas basically returned the same results that we had received earlier in the year in January and in June from a number of different tests done by the Bureau of Standards on Shadwell 2. Based on the results received from those two labs the water isn’t safe for consumption. Therefore we have to look at alternatives in terms of making that water safe for consumption,” Deputy Prime Minister Richards explained.

Minister Richards said they are currently in negotiations with a group of experts from overseas to come in and assist the ministry with this ongoing issue.