Renovations of the Sir Lee L Moore Judicial Complex to begin; cause of building vacancy mold 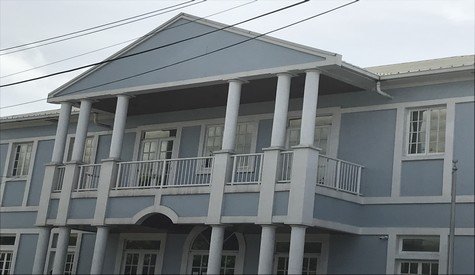 St. Kitts and Nevis (WINN): Early in June, the Ministry of Justice and Legal Affairs informed the general public of the suspension of all activity at the Sir Lee L Moore Judicial Complex because of the need to conduct significant renovations and took effect on June 7.

The reason behind the renovations was a mold infestation in the building that could threaten the health of those who use the facility.

“There was and an incidence of mold in which when tested by the bureaux of standards, there were high levels of mold in the building, and we would not have been safe for the staff initially and the general public and lawyers attending there,” said Attorney General and Ministry of Justice, Legal Affairs, et al., the Hon Vincent Byron Jr.

Currently, some staff, including justices, are operating, and the court services are being offered in the old C&C building on George Street.

“What we have done is that we have engaged again with Public Works, and the ground floor of the C&C building that is now part of the Ministry of Legal and Justice Affairs has been identified as a temporary site where there will be two court chambers constructed downstairs, one for civil matters [and] another one to hold a jury panel and a jury room as well. The registry of the High Court would be [on] the ground floor. On the third floor of that building would be where the judges’ chambers [is located].”

There has been a disruption in Magistrate Court matters; however, another site is being decided on, and the Justice Minister said the new space would be communicated shortly.

The Magistrate Court in the new annex is being utilised but is unable to facilitate all matters effectively.

Work on the building has not yet started. Minister Byron said that tenders for the works were fielded, four contractors were chosen to submit quotes for the renovations, and a decision on which contractor will be used is expected in the coming weeks.

According to Byron, the renovation should take six-eight weeks, and he said he was hopeful that the work would be completed during the High Court’s summer recess, which ranges from July 31 to mid-September.