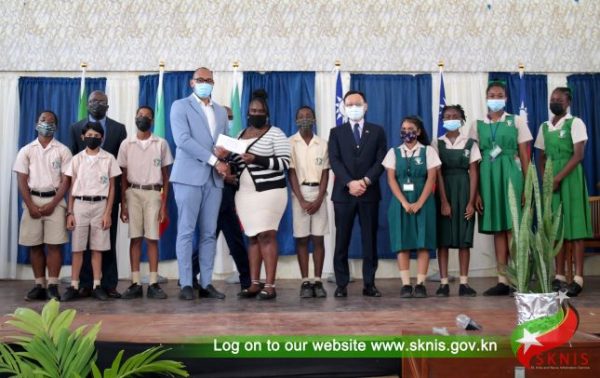 The latest of such was showcased at the annual Monetary Taiwanese Scholarship Ceremony on March 23 at the Immaculate Conception Catholic Church Auditorium, where 170 students – 126 from St. Kitts and 45 from Nevis – from primary, secondary and tertiary educational institutions were awarded.

Resident Ambassador of the Republic of China (Taiwan) to St. Kitts and Nevis, His Excellency Michael Lin, said that investing in human resource development is extremely important to fueling national development.

His Excellency Lin congratulated the recipients on their achievements and encouraged them to keep excelling. He also expressed gratitude to the Ministry of Education and by extension, the Government of St. Kitts and Nevis for their “strong support in the project” adding that through this “strong effort” of the two countries “we will continue to support the students and teachers, as well as the human resource development in St. Kitts and Nevis.”

Minister of Education, the Honourable Jonel Powell, reflected on the relationship between both countries and expressed gratitude to the Government of the Republic of China (Taiwan).

“The partnership and friendship forged with the Government and people of the Republic China (Taiwan) have grown tremendously and for that we are eternally grateful. Without their generosity the celebration would not have materialized,” said Minister Powell.

The annual Monetary Taiwanese Scholarship project provides funding for scholarships and other teaching and learning resources. The ceremony was slated for late 2021 but had to be postponed due to circumstances surrounding COVID-19.