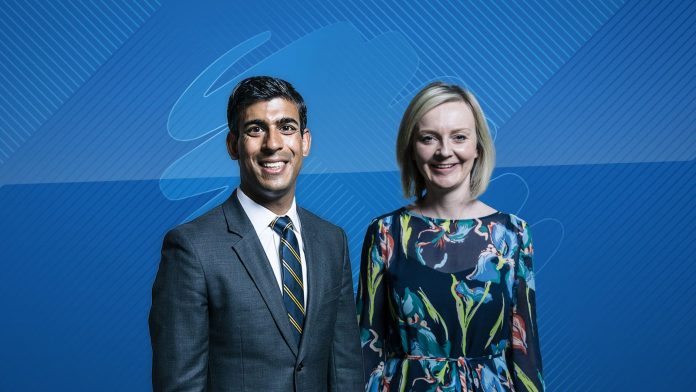 (Sky News) Rishi Sunak and Liz Truss will go head-to-head to become the next leader of the Conservative Party – and prime minister of the UK – after Penny Mordaunt became the latest candidate to be knocked out of the contest.

In the fifth and final round of voting by Tory MPs, the leadership contenders received the following support:

There were two spoiled ballots and one individual did not vote.

Ms. Mordaunt had been second in all previous rounds of voting, but a late surge by Ms. Truss – who gained 27 votes in 24 hours – cost her a place on the ballot, with just eight votes separating the pair.

The leader of the race, former Chancellor Mr. Sunak, gained 19 supporters, while Ms. Mordaunt could only recruit an extra 13.

Now it will be down to the winder Conservative Party members to decide on its next leader from the final two after a summer of hustings, with a result set to be announced on 5th September.

Speaking after the result, trade minister Ms. Mordaunt said she would “continue to work hard” to repay those who supported her and stressed that Conservative MPs “must all now work together to unify our party”.

She also congratulated Mr. Sunak and Ms. Truss, saying: “I pay tribute to anyone who puts themselves forward for such a demanding role,” said Ms. Mordaunt.

“Politics isn’t easy. It can be a divisive and difficult place. We must all now work together to unify our party and focus on the job that needs to be done.

Ms. Mordaunt added: “I am a One Nation, proud Brexiteer. My campaign put forward a positive vision for the country I love so much, remembering who we are here to serve.

“Our mission is not only to deliver on what we promised but to win the fight against Labour at the next general election. I hope to play my part in both”.