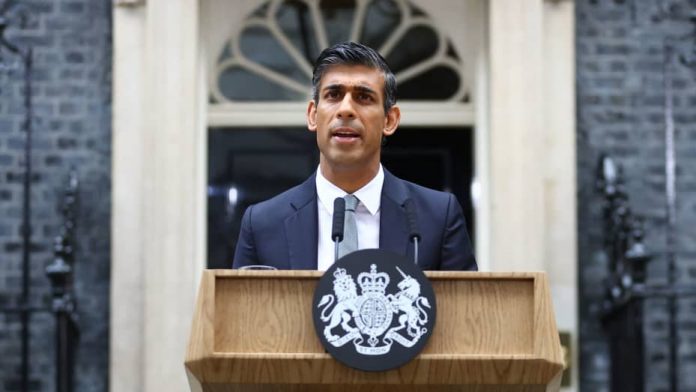 by Aubrey Allegretti (The Guardian) Rishi Sunak has used his first speech as prime minister to warn the UK is in the grips of an “economic crisis” as he vowed to fix “mistakes” made by Liz Truss and win back voters’ trust.

Addressing the nation in a sombre tone and without the usual throng of supporters to clap the PM into No 10, Sunak warned there would be “difficult decisions to come” in an attempt to regain economic stability and avoid mass borrowing mounting up.

Speaking from Downing Street just over an hour after Truss delivered an unapologetic resignation speech, Sunak said his government would demonstrate “integrity, professionalism and accountability”, stressing a change in approach from the last two Tory administrations.

Sunak, the UK’s second unelected prime minister in seven weeks, sought to head off calls for a general election by insisting he would stick to the Conservatives’ 2019 manifesto that won the party an 80-seat majority.

He said the victory was “not the sole property of any one individual” but a “mandate that belongs to and unites all of us” – a swipe at those Tory MPs who have insisted he should seek a fresh endorsement from the public.

Though Sunak said he admired Truss’s “restlessness to create change”, he said he was clear that “some mistakes were made” and he believed he had been chosen by Tory MPs “to fix them”.

“That work begins immediately,” he stressed.

Sunak did try to pin the blame for some volatility on Covid and Russia’s invasion of Ukraine, saying that “right now, our country is facing a profound economic crisis”.

His speech lasted five minutes and 56 seconds – longer than all of the equivalent speeches by prime ministers in recent decades except for Boris Johnson in 2019, who spoke for 11 minutes and 13 seconds.

Amid speculation he will be forced to cut public spending to plug a roughly £30bn fiscal black hole, the new prime minister said there were “difficult decisions to come” but highlighted the furlough scheme he devised during the pandemic and insisted: “I will bring that same compassion to the challenges we face today.”

Again seeking to contrast himself with Truss, who planned to rack up huge borrowing bills to pay for swingeing tax cuts before she was forced into an almighty U-turn on her economic agenda, Sunak said he would “not leave the next generation … with a debt to settle that we were too weak to pay ourselves”.

Given the chaos that engulfed Truss and forced her to stand down after only 50 days in the job, Sunak said he understood he had “work to do to restore trust after all that has happened”.

But he said he was not daunted and would aim to live up to the demands of high office, and wanted to “fill tomorrow and every day thereafter with hope”.