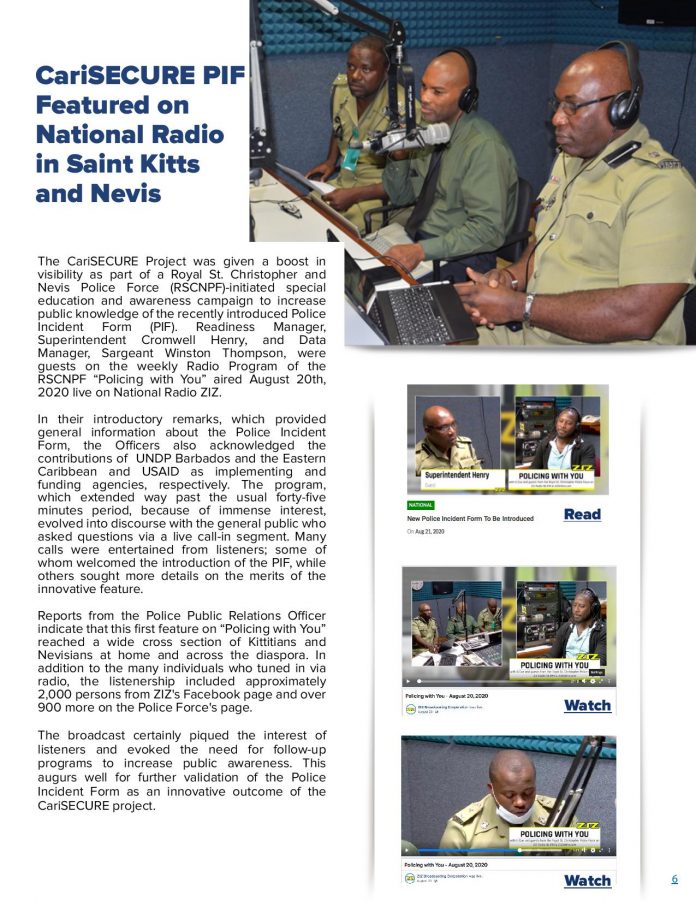 Basseterre, St. Kitts (RSCNPF): The Royal St. Christopher and Nevis Police Force has a lot to be proud of for the role of its Officers in the implementation of the CariSECURE project. Their efforts, as well as those of the National Team, and the Police Force’s weekly radio show “Policing With You” were highlighted in the August-October 2020 edition of the CariSECURE Newsletter.

The radio programme received a full-page write-up in an article entitled CariSECURE PIF Featured on National Radio in Saint Kitts and Nevis. The article states that “The CariSECURE Project was given a boost in visibility as part of a Royal St. Christopher and Nevis Police Force (RSCNPF)-initiated special education and awareness campaign to increase public knowledge of the recently introduced Police Incident Form (PIF).” The popular weekly programme is aired every Thursday at 9:15 a.m. on ZIZ Radio and is streamed live on the Facebook pages of ZIZ Broadcasting Corporation and The Royal St. Christopher and Nevis Police Force, in addition to ZIZ’s Youtube Channel.

On that particular edition, CariSECURE Readiness Manager for the RSCNPF, Superintendent Cromwell Henry and Data Manager, Sergeant Winston Thompson, provided information about the Police Incident Form that is now being used by the Police. The article notes that information coming out of the Police Public Relations Department shows that the programme “reached a wide cross section of Kittitians and Nevisians at home and across the diaspora. In addition to the many individuals who tuned in via radio, the listenership included approximately 2,000 persons from ZIZ’s Facebook page and over 900 more on the Police Force’s page.”

Also in the newsletter is an article entitled Nine Caribbean Countries Leading the Way in Data-Driven Crime Prevention in which it states that nine Caribbean countries are leading the way in data-driven crime prevention and are now certified in Crime Analysis. Among the nine countries is St. Kitts and Nevis from which a team – that included Police Officers – recently participated in a 7-month Regional Crime Analysis Training Course with the Arizona State University. This course was meant to bolster the individual and collective competencies of beneficiary territories to enhance regional citizen security and employ reliable data to crime prevention efforts. Several countries and agencies received an Honorary Mention and Special Awards for case studies and course projects including St. Kitts and Nevis whose team received a Special Award for Best Tactical Analysis Report thanks largely to Sergeant Thompson’s hard work.

In another article in the newsletter entitled CariSECURE Initiates Project Working Groups (PWGs) in Target Countries, it explains that CariSECURE’s Team Leader John Walcott introduced the PWG concept during the recently held series of National Task Force meetings and urged beneficiary countries to set about establishing these bodies with haste. “Since Mr. Walcott’s call to action, the teams in St. Kitts and Nevis have been proactive in establishing their PWG and have already held two meetings…” the article states. Superintendent Henry and Sergeant Thompson represent the Police Force in that Group.