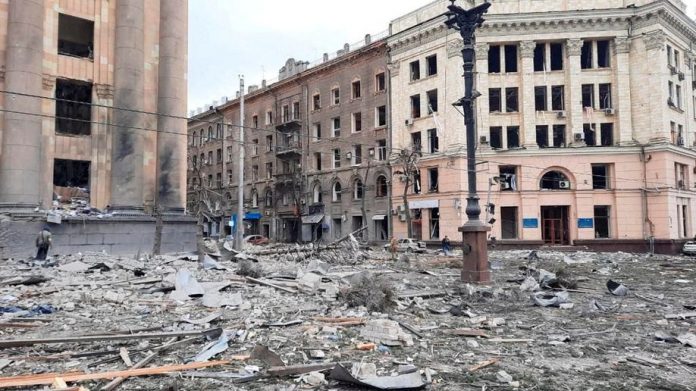 The Ukrainian president, Volodymyr Zelenskiy, said successive Russian missile strikes on Kharkiv, including the latest on the central administration building, amounted to state terrorism and a war crime.

“Evil, armed with rockets, bombs and artillery, must be stopped immediately, Zelenskiy said. “Destroyed economically. We must show that humanity is able to protect themselves.”

In an emotional address to the European parliament, Zelenskiy said Ukraine “has a desire to see our children alive – I think it is a fair one. We are fighting for survival. We are fighting to be equal members of Europe. We are exactly the same as you are.”

More than 70 Ukrainian soldiers were also killed in the eastern city of Okhtyrka, between Kharkiv and Kyiv, in a Russian missile strike on a military base, local officials said, giving conflicting accounts of when the attack on the barracks took place.

On the sixth day of fighting since Russia’s all-out invasion of Ukraine, the failure of its armed forces, amid continuing stiff resistance, to capture a single major city has led western countries to warn that commanders may increasingly bomb civilian areas.

International sanctions and global financial isolation, which have had a sudden and devastating impact on Russia’s economy, with the rouble in freefall and long queues outside banks, may further increase the Kremlin’s frustration, observers have said.

“The Russian advance on Kyiv has made little progress over the past 24 hours, probably as a result of continuing logistical difficulties,” the British defence ministry said in a military intelligence update on Tuesday.

But it warned that the apparent shift in Russian tactics would inevitably put Ukrainian civilians at much greater peril, saying: “The use of heavy artillery in densely populated urban areas greatly increases the risk of civilian casualties.”

At least 136 civilians have been killed, including 13 children, and 400 have been injured since the start of the invasion last week, the UN human rights office OHCHR said on Tuesday, adding that the real toll would almost certainly be much higher.

The Kremlin spokesman, Dmitry Peskov, said allegations of Russian strikes on civilian targets and the use of cluster and vacuum bombs were fakes, adding it was “out of the question” that sanctions would “force us to change our position” on the invasion, which Russia calls a “special operation” to demilitarise and “denazify” Ukraine.

The British prime minister, Boris Johnson, said at a press conference in Warsaw with his Polish counterpart Mateusz Morawiecki that it was clear Putin was “prepared to use barbaric and indiscriminate tactics”.