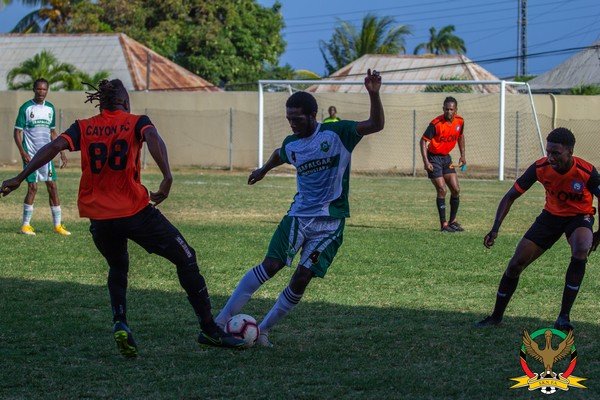 S.L. Horsfords St. Paul’s United was ruthless in their 7-0 defeat of strugglers TGE Dieppe Bay Eagles in weekend action of the SKNFA Premier League on Saturday. That was one of three matches played on Saturday—the first of the triple-header saw Cayon crushing Trafalgar Southstars 6-1 followed by a 2-2 deadlock between MFCR United Old Road Jets and S-Krave Newtown United.

After a disappointing Cayon return debut last weekend, striker Carlos Bertie showed promise of the much-needed firepower Cayon needed with a hattrick against Trafalgar Southstars. Bertie scored two of those three goals in the first half in the 10th and 18th minute and the third in the 58th minute.

Southstars played the last 22 mins with 9 men after

After the match, the team at the Premier League Live Broadcast on the SKNFA Facebook page comment on the proceedings. “It was a good performance by Cayon, especially Carlos Bertie in his second coming to Cayon,” said commentator Esington Watts.

The team at the Premier League Live broadcast showered praises on an efficient and ruthless St. Paul’s. “It was a very good performance from St. Paul’s. The man of the match for sure would be Freeman—once again he is on the scoresheet, this time scoring a hattrick. A very good hattrick,” Watts said. He hinted that based on their performance in the league thus far, St. Paul’s may very well qualify first for the playoffs awaiting the others to join.

Then in the final match on Saturday:

The match ended in a tense manner as Orland Wattley was sent off with a straight red card in the 4th minute of stoppage time. He was apparently displeased with what he believed was a non-call from the referee for a penalty in the dying moment of the match. The commentary team discussed the match, where they praised the performance of Tiquanny Williams. “He is an entertainer. He is very exciting to watch,” Watts said.