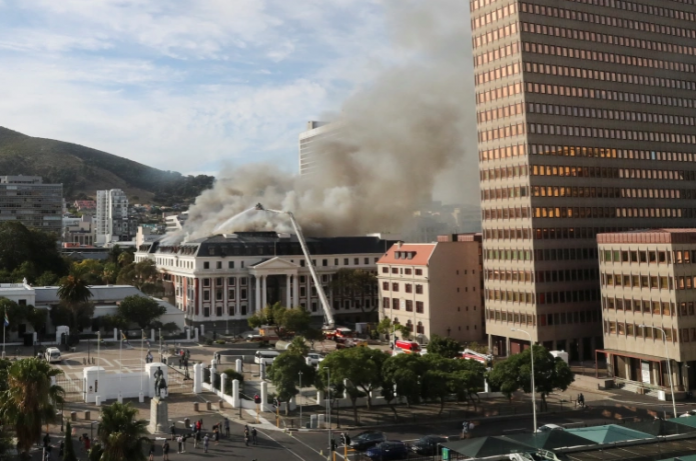 (Al Jazeera) A new blaze at the complex housing South Africa’s Parliament in Cape Town has been contained, according to officials, as a suspect arrested in connection with the fire appeared in court.

An initial fire on Sunday caused the roof of the New Wing housing the assembly’s lower chamber to collapse. The roof of the Old Wing, which dates back to 1884 and houses the upper chamber, the National Council of Provinces, also partially collapsed. The new blaze broke out on Monday.

The National Assembly in the New Wing of the parliament complex was “completely destroyed from bottom right through to the top,” Cape Town City Chief Fire Officer Ian Schnetler told journalists. “It is going to take a lot of rehabilitation to get that back to where it was.”

Cape Town city officials said in a statement on Tuesday that the new fire was brought under control at midnight.

“Teams are now working their way through the maize-like building, room-for-room, as they attempt to locate and extinguish [hot spots].”

“This is a lengthy process, as some rooms are needing to have their interior wooden cladding pulled apart, in order to identify any concealed hot spots,” they said.

A 49-year-old man accused of setting the fire appeared in court to face five charges including arson and possession of an explosive device. A lawyer for suspect Zandile Christmas Mafe said he denied the accusations and would plead not guilty. The case was adjourned until January 11.

Officials have said important sections including a museum with artworks and heritage objects were saved from the blaze, as was an embroidered tapestry telling the story of the Eastern Cape on the ground floor of the Old Assembly Building.

“This building is very important to South Africans,” Al Jazeera’s Jillian Wolfe, reporting from outside the complex, said. “It is a place that is the heartbeat of democracy, it is the place where the parliamentarians gather to debate policy and legislation, and it is also where the president delivers the state of the nation address,” she added.

“There is going to be some significant cost involved in refurbishing this building.”

On Monday evening, crowds of people gathered outside the complex as crews of tired firefighters continued their hours-long efforts to put out the flames.

“To see the walls burning like this, it makes me very sad,” Danny, a Cape Town resident, told Al Jazeera. “I’m actually lost for words to see this happening.”

On Tuesday, Parliament said in a statement only six of the 10 fire trucks were now remaining on the scene and it was hoped that more trucks would be withdrawn during the course of the morning.

“Further damage has been caused, with more floors of the building, which houses offices of Members of Parliament and support staff, being completely gutted,” the statement said.

The elite Hawks police unit said on Monday the suspect was believed to have gained entry to the Parliament through an office window.