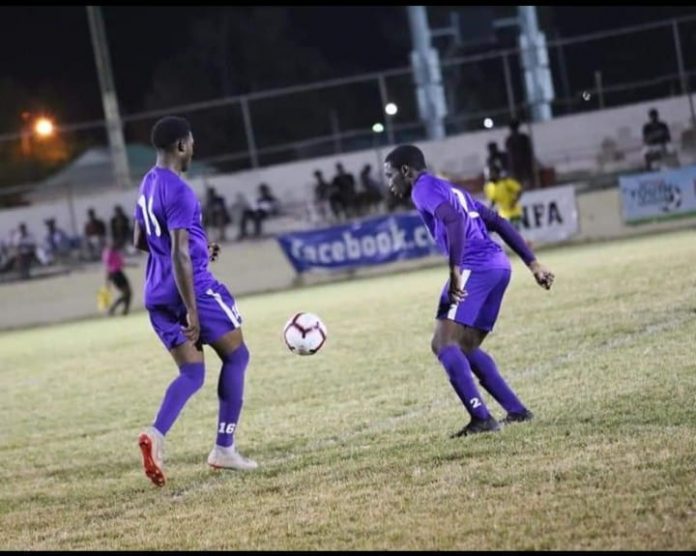 (SKNFA) Fast Cash Saddlers F.C. clipped the wings of Dieppe Bay Eagles 8-2, while St. Peters F.C.
delivered a shock 6-0 defeat to SOL IAS Conaree F.C. in SKNFA Premier League Football
action at the Warner Park on Wednesday. Saddlers were gunning from the start for a victory and hardly gave Dieppe any chance of scoring. The premier league newcomers however did manage to score two goals in the second half.

Saddlers F.C. will next do battle on Saturday at 7:30 pm when they face S-Krave Newtown
United while Dieppe Bay will play Rams Village Superstars at 5:00 pm also on Saturday.
St. Peters 6, Conaree 0.

In the night’s other match, St. Peters F.C delivered a demolition job of SOL IAS Conaree F.C. on Wednesday in SKNFA Premier League Action at the Warner Park. Conaree were handicapped in goal as having changed their starting goalkeeper Steven Thompson at half time, their substitute keeper Dontre O’Loughlin picked up what appeared to be a knee injury and eventually had to be subbed for one of the outfield players Keondre Maynard who suited up between the sticks for the remainder of the match. Poor defending and failure to create enough chances doomed Conaree to a comprehensive defeat as every time St. Peters were on the attack, they looked dangerous.

Conaree will next play Hotsprings Bath United on Sunday at 4 pm and St. Peters will take on Flow 4G Cayon Rockets at 6:30 pm also on Sunday. All these matches and the other weekend matches will be streamed live on the SKNFA website free of cost for a second weekend in a row.