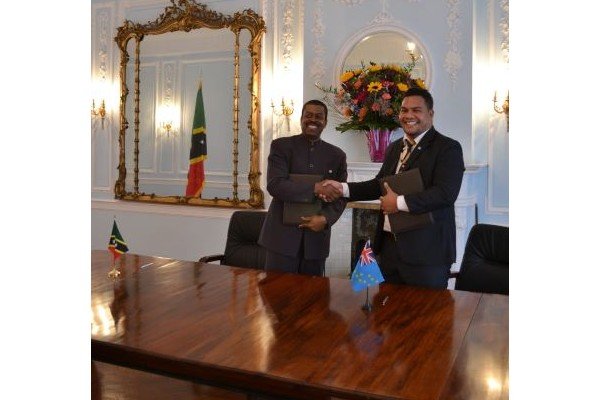 Basseterre, St. Kitts (Ministry of Foreign Affairs and Aviation): At a ceremony on Monday, 4th April, 2022 at the High Commission of Saint Kitts and Nevis in London, Tuvalu’s Minister for Foreign Affairs, Justice, and Communication, the Honourable Simon Kofe and the High Commissioner of Saint Kitts and Nevis, H.E. Dr. Kevin Isaac, signed a joint communiqué officially establishing diplomatic relations between the two countries. On that same occasion, a mutual Visa Waiver Agreement was also signed between the two diplomats, granting visa-free travel for up to ninety days to citizens of either country holding a valid passport.

The ceremony to formalize diplomatic ties is consistent with the commitment of Saint Kitts and Nevis to deepen and broaden its network of global partners and friendships and promote greater opportunities for all Kittitians and Nevisians to expand their own networks of relationships around the world.

Tuvalu’s Minister for Foreign Affairs expressed best wishes to Saint Kitts and Nevis and hoped that both countries could continue to cooperate and prosper.

High Commissioner Isaac spoke of the efficient cooperation between the Government of Tuvalu and the High Commission of Saint Kitts and Nevis in London in preparing for the establishment of diplomatic relations and visa waiver agreement. He welcomed the opportunity for both countries to increase bilateral and multilateral cooperation across important matters such as maritime law, international security and climate change.

The spirit of cooperation enshrined in the joint communiqué also highlights the existential threat climate change poses to small island states, such as Tuvalu and Saint Kitts and Nevis. In addition, this communiqué shows that both nations are committed to maintaining the well-being of global populations and environments in the face of shared global threats.