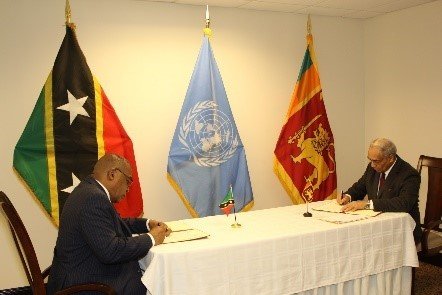 Basseterre, St. Kitts (Ministry of Foreign Affairs): On Monday 22nd March 2021 at a ceremony in New York, H.E. Mr. Ian Liburd, Permanent Representative of the Federation of Saint Kitts and Nevis to the United Nations, and H.E. Mr. Mohan Pieris, Permanent Representative of The Democratic Socialist Republic of Sri Lanka to the United Nations, signed joint communiqués on behalf of their respective Governments. Ambassadors Liburd and Pieris exchanged greetings from their respective Heads of Governments and Foreign Ministers and expressed their desire of building a greater relationship.

The Ambassadors also discussed several issues regarding the current COVID-19 situation, health, education, and sports, and made a firm commitment towards advancing a “Mutual Visa Waiver Agreement for Holiday Travel” between the two countries in the near future. Both Ambassadors became closely connected through their revealed love for cricket – a widely played sport in both countries.

Both Governments have agreed to further augment existing friendly relations and cooperation in the political, socio-economic, and cultural fields, that would redound to the reciprocal benefit of both countries. They happily shared commonalities and cultural interests and spoke of ways these similarities can further enhance continued cooperation between the two countries.