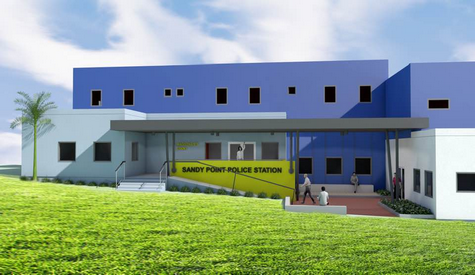 St. Kitts and Nevis (WINN): The new Sandy Point Police Station is set to officially open on Tuesday, December 21, 2021, according to Prime Minister and Minister of National Security Hon. Dr. Timothy Harris in a Facebook post on Monday.

The Sandy Point Police Station, located at Bouncing Hill, broke ground on January 24, 2019. It was expected to be completed by February 15, 2020.

The police station was constructed at a cost of approximately $5.5 million. It is equipped with access ramps, impact-resistant windows, a spacious recreation room, a communication office, an interview room, an open deck, two laundry rooms, two kitchens, and barracks. It has a large garage that can accommodate two fire tenders and has more than 30 parking spaces for the public.

Contractor for the project was Mr. Anthony Skeete, Managing Director of Skeete and Associates Construction Company.