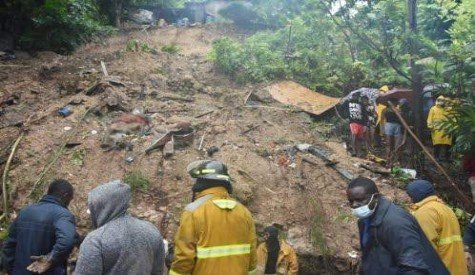 (Jamaica Observer) Efforts to find 15-year-old Sanique Leachman, who is suspected to have died after a major landslide in Shooter’s Hill, Bull Bay, St Andrew, flattened the home she shared with her father, Romeo Leachman, continued up to press time last night.

The father-and-daughter duo was reported asleep inside the house when the landslide swept the wooden house in which they lived metres down a slope in a section of the community called Toby’s Gully or Passion Gardens yesterday morning.

The father, a 42-year-old landscaper, perished in the mudslide. His body was found buried in the rubble by residents who were alerted when neighbours shouted for help.

“I don’t even have words to say anything,” said Horace Recurd, Leachman’s neighbour, who said he was busy sweeping silt and muddy water from his house when he heard the commotion outside.

“When the woman start call out, me and my family were paying attention to what we were doing, because water was coming into our house. When mi run outside and look, mi nuh see Romey house,” said Recurd.