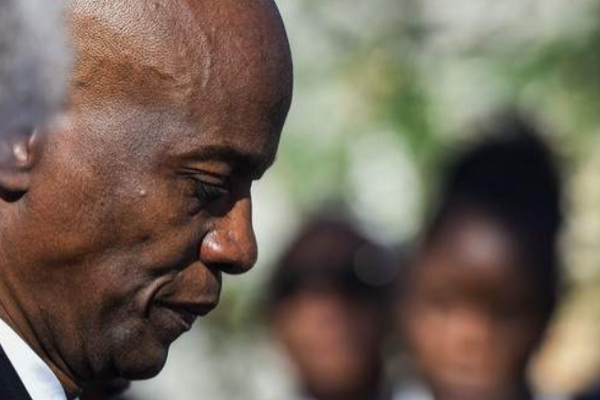 WASHINGTON, United States (CMC) — The United States Department of Justice said that a Haitian-Chilean citizen has been arrested for his alleged involvement in the assassination of the 53-year-old Haitian President, Jovenel Moise, who was gunned down at his private residence on July 7 last year.

In a statement, the DOJ said that Rodolphe Jaar, 49, had been charged with conspiring to commit murder or kidnapping outside the United States and providing material support resulting in death, knowing or intending that such material support would be used to prepare for or carry out the conspiracy to kill or kidnap.

Jaar is the second individual to be charged and arrested in the United States for his role in the assassination plot.

According to the complaint, which was unsealed on Wednesday, the defendant and others, including a group of approximately 20 Colombian citizens and several Haitian-American citizens, participated in a plot to kidnap or kill Moise.

“In particular, as alleged, Jaar was present when another conspirator, described as “Co-conspirator #1, secured the signature of a former Haitian judge on a written request for assistance to further the arrest and imprisonment of President Moise,” according to the complaint.

It said that on June 28, 2021, Co-conspirator #1, a Haitian-American citizen travelled from Haiti to the United States in furtherance of the conspiracy and provided other individuals with the document, and flew from Florida back to Haiti on July 1, 2021, to participate in the operation against the president.

“As alleged in the complaint, while the plot initially focused on conducting a kidnapping of the Haitian President as part of a purported arrest operation, it ultimately resulted in a plot to kill the president. The complaint alleges that on July 7, 2021, various co-conspirators entered President Moise’s residence in Haiti with the intent and purpose of killing him, and in fact, the president was killed.”

After the assassination, Jaar allegedly communicated with Co-conspirator #1 and others to assist the Colombians and Co-conspirator #1 while they were in hiding from Haitian authorities, according to the DOJ statement.

It said Co-conspirator #1 was subsequently arrested by Haitian authorities and remains in custody in Haiti. Jaar was arrested in the Dominican Republic and agreed to travel to the United States. He is currently in custody and appeared in a Miami court on Thursday before US Magistrate Judge Lauren Louisin of the Southern District of Florida for his initial appearance.

If convicted of the charges in the complaint, Jaar faces a maximum sentence of life imprisonment. A federal district court judge will determine any sentence after considering the US Sentencing Guidelines and other statutory factors.

“A criminal complaint is merely an allegation, and all defendants are presumed innocent until proven guilty beyond a reasonable doubt in a court of law,” the DOJ added.