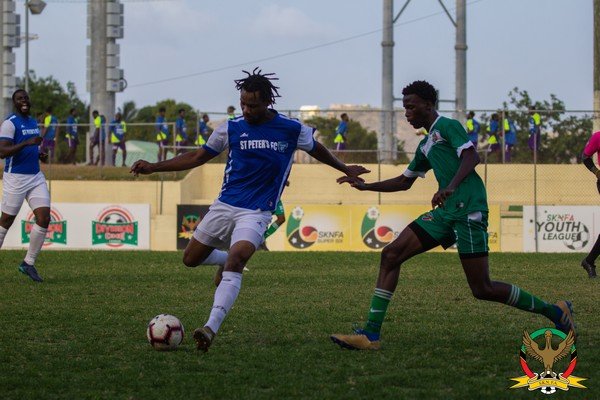 The commentary team of Al Edwards and Esington Watts commented on the fortunes of Bath United to avoid relegation even after this result. “The three bottom placed teams all played this weekend and all lost,” said Al Edwards. He added that Bath on the other hand, lose by a smaller margin compare to their lower ranked opponents, which is instrumental for goal difference and placement. “I think they are in the number 10 position only on goal difference,” Edwards said.

For the commentary team of Sylvester Charles and Esington Watts, they believe though an arduous victory for Village, came down to three valuable points. “We will just have to congratulate the coaching staff, for giving the impetus to the players to rise above the occasion and get that all important goal…that’s all it took to get the three points so congratulation to the Village Superstars,” Charles said.

And finally, SOL IAS Conaree F.C. came from behind to edge Hobson Enterprises Garden Hotspurs 2-1. Spurs earned scored a goal within the first minute of the match through Tishan Hanley, only for Geovannie Lake, who had just returned the Premier League from a one match suspension for a red card in his last match, to be giving marching orders again this time for a straight red card in the 17th minute. Referee Kimbel Ward ruled a foul he committed in the 17th minute as serious foul play deserving of a red.

That left Spurs with just ten men for most of the match and it took its toll in the second half with two errors from goalkeeper Adolphus Jones—one in the 57th minute where he inadvertently knocked the ball in his own net from a corner kick and missing out on a ball which was tapped in the goal by Trevor Hanley in the 59th minute.
The Premier League Live commentator and analyst Loshaun Dixon and Derrick Mills assessed the match and the victory for Conaree. “You see them come back out in the second half and it was all business for Conaree. They took advantage of (having the extra player),” Mills said. The SKNFA Premier League continue this weekend at Warner Park.