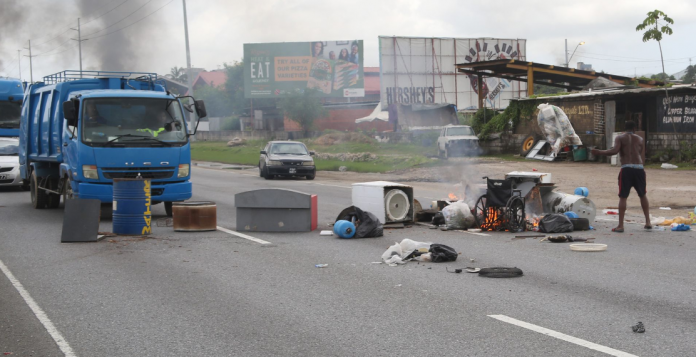 (CMC) – More than 200 police officers and members of the Trinidad and Tobago Defence Force (TTDF) patrolled the outskirts of the country Monday as protestors burnt tyres and blocked roads in retaliation for the shooting death of four people by police last weekend.

Acting Commissioner of Police McDonald Jacobs said eight people had been arrested as a result of the fiery protests in and around east Port of Spain.

He said the roads have been cleared and that the protest had been well organised.

“What we saw is that some persons choose to go into the inner city…to create some blockage and that is being handled by the officers,” he said, adding that those arrested were “actually throwing debris on the roadway.

“The police are still out there together with the Defence Force,” he said reassuring the population that security officials will remain in the areas to ensure that there is no repeat of the actions.

The Public Transport Service Corporation (PTSC) is suggesting commuters consider making alternative travel arrangements where possible because of the unrest in Port of Spain.

In a notice on Monday, the PTSC said it had to adjust its normal scheduled services because of disruptions caused by the blockage of the Beetham Highway and Priority Bus Route.

PTSC said the disruptions will affect its normal flow of services. “We are monitoring this situation and will continue to keep our commuters updated on all changes to our schedules.”

The protests began on the Beetham Highway, east of the capital, and quickly spread to nearby areas such as Sea Lots and parts of east Port of Spain including Nelson and Duncan streets as angry residents set fire to rubbish and debris to protest the police-involved killing of three men on Saturday.

Over the weekend, police said they were pursuing a stolen vehicle in Diego Martin west of here, around 3:20 am (local time) on Saturday and that vehicle with six men on board crashed when it reached the capital, Port of Spain.

Two people were shot dead in the back seat, one in the passenger seat and a fourth was injured by gunfire. The dead men were identified as Fabian Richards, Niko Williams, both in their 20s, and 17-year-old Isaiah Roberts.

Jacobs said that while the police were prepared to deal with the unrest, there were other persons fuelling the protest.

“There were in fact some individuals who were riling up the persons in order to carry out the actions and it was well organised and most of the road blockages were done simultaneously,” he said, adding that the officers involved in last Saturday’s shooting incident have been removed from active duty.

‘The officers who were involved in the shooting incident have been placed on desk duty and the investigation is being conducted by a first division officer in conjunction with the Professional Standards Bureau”.