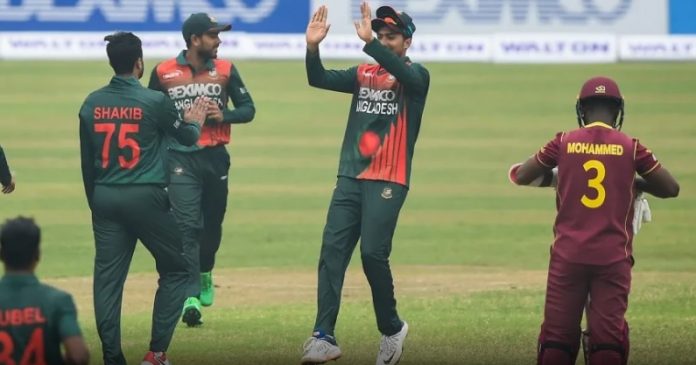 (ESPNcricinfo) – Shakib Al Hasan, who was serving a one-year ban for not reporting a corrupt approach from 2019, had a fruitful return to international cricket as his 4 for 8 helped Bangladesh beat an inexperienced West Indies by six wickets in the first ODI in Mirpur. The win gave Bangladesh a 1-0 lead in the three-match series and also earned them their first points in the World Cup Super League.

On paper, it would appear to be a one-sided win for Bangladesh, but West Indies – who were fielding six debutants – had some positives to take from the game despite being bowled out for 122. Debutant Kyle Mayers, who struck 40, showed promise on a spin-friendly surface while left-arm spinner Akeal Hosein – also playing his first ODI – spun a web around the Bangladesh top order with his variations to finish with 3 for 26. However, a target of 123 was simply too low for West Indies to keep sustaining the pressure, as Bangladesh won with 16 overs to spare.