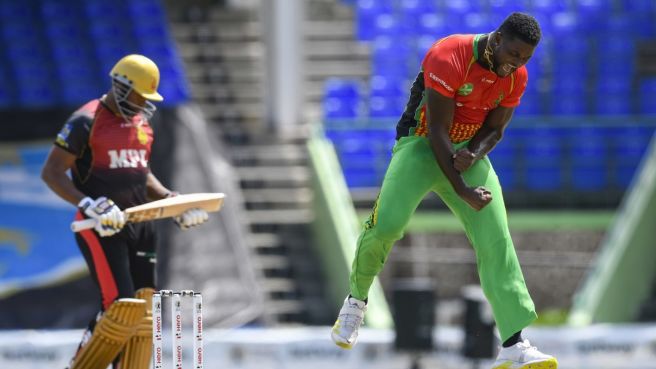 ESPNcricinfo – The match belonged to Guyana Amazon Warriors’ Romario Shepherd. He first took 3 for 24 to restrict Trinbago Knight Riders to 138 for 9, then hit a nine-ball 18 to take Amazon Warriors to the same total, and finally conceded just four runs in the Super Over to help his side do the league-stage double over the defending champions.

Defending six runs in the Super Over, Shepherd first had Knight Riders captain Kieron Pollard hole out first ball. Then he did not allow Colin Munro or Tim Seifert to hit a boundary off the other five balls. His all-round effort justifiably earned him a Player-of-the-Match award too.

Nicholas Pooran’s Amazon Warriors needed just 139 to win after Shepherd and off spinner Mohammad Hafeez picked three wickets each to restrict Knight Riders to a below-par total. Shepherd made the most damage in the first innings’ death overs removing Pollard, Denesh Ramdin and Isuru Udana. Hafeez had made the early inroads by dismissing opener Sunil Narine, No. 3 Tion Webster and an off-colour Tim Seifert.

Colin Munro, who struggled with a 47-ball 40 in his team’s last CPL match found his form to anchor the innings with a 28-ball 32. However regular wickets never allowed the Knight Riders to push for a big total, and if it wasn’t for Udana’s nine-ball 21 in the slog overs, the Amazon Warriors might have been chasing a much lower total.

However, the Knight Riders fought back with the ball in the second innings power play. Chandrapaul Hemraj and Odean Smith fell in the first two overs to Ravi Rampaul‘s deliveries that had a tendency to snake into the stump line after pitching.

Shimron Hetmyer and Hafeez then began a rescue act, but the Pakistan international eventually perished for a 30-ball 16. Narine then had Hetmyer and Shoaib Malik caught behind in quick succession, and after Rampaul picked off Pooran and Brandon King in consecutive balls, it looked like the Knight Riders were going to win the contest.

It however needed the Amazon Warriors’ Nos. 9 and 10 to take them to a tie. Shepherd tonked two sixes and a four to score 18, and then Naveen-Ul-Haq hit a five-ball 13. Amazon Warriors needed two off the final ball to seal a one-wicket win, but a run out while searching for the double dragged the game to overtime.