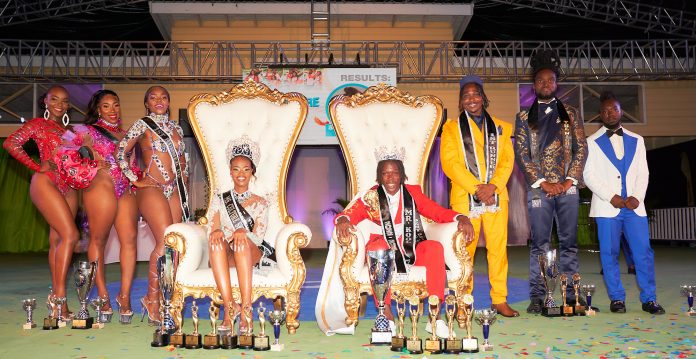 Similarly, Browne won all segments in the Mr. Kool Show; Most Popular, My Brother’s Keeper, Best Identical Beach Wear, Best Pride of Oualie and Best Performing Talent. He was sponsored by the Nevis Cultural Development Foundation.

Both Sherquanya Jeffers and Rocco Browne had the same chaperone in the person of Devaughn Browne. WINN FM spoke to the chaperone on Wednesday afternoon July 27 who expressed that he is still very overjoyed and emotional with the performances and results of his clients. Browne, the chaperone, said he encouraged Jeffers to participate in the Miss Culture Swimwear Pageant 2021, but due to COVID-19 the event was not held. The chaperone said he was certain that Jeffers would capture the crown once she entered the pageant and she didn’t disappoint. In contrast, Devaughn Browne said his male client Rocco Browne surprised him on show night; adding that the energetic performances displayed by Rocco on-stage surpassed those of his practice sessions. “He was a different person on stage,” said the chaperone.

Additionally, the chaperone said the preparation for the shows were quite hectic having had to pay attention to two individuals of different genders, for different shows to be held on the same night. “It was a lot of back and forth and a lot of sleepless nights. Sometimes I cried because we weren’t getting through with some stuff,” he mentioned. With the duty of ensuring that both Browne and Jeffers executed plans on show night, the chaperone said, he seeked the assistance of his sister Avis Glasgow, as well as his cousin who together with him, juggled their time and attention between the clients backstage.

Chaperone Browne said he is quite happy that both of his clients were successful on show night. He added that this is the first time under his stewardship that he has had more than one client capturing a crown in one night or within the same year.

Browne has expressed congratulatory words to his clients on their success. “I would like to say congratulations to Rocco Browne and Sherquanya Jeffers. You guys made me proud and I will work with you anytime again, because I actually enjoyed the journey with you guys. I hope both of you enjoy your reign and live life to the fullest.”