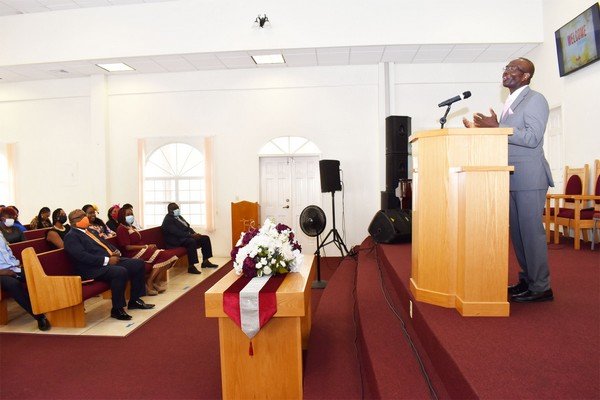 BASSETERRE, ST. KITTS (MMS-SKN) — Delivering a sermon based on Psalms 126:1-6 under the theme ‘The Lord has done great things for us’, Pastor Emeritus Eric Maynard of the Shiloh Baptist Church in Charlestown, Nevis, told the congregation on Sunday August 8 that the now successful church was started 50 years ago out of necessity.

At the worship service which was attended by Prime Minister of the Federation of St. Kitts and Nevis Dr the Hon Timothy Harris, Federal Minister of Health the Hon Akilah Byron-Nisbett, and Commissioner of Police Mr Hilroy Brandy among others, Pastor Eric Maynard said that he had just returned from Bible School in July 1971, when the then pastor at the Baptist Church in Brick Kiln called for his intervention.

He noted that the old Volkswagen bus that was used to transport church members from Charlestown to Brick Kiln had broken down the day before. The pastor asked Mr Eric Maynard, who had become a born again Christian five years earlier, to organise and have a service held at some place in Charlestown.

Even though it was a short notice, that Sunday August 8, 1971, they got together and met in the living room in the house of Brother St. Clair Clarke at Craddock Road in Charlestown where they had their first Sunday morning worship away from the Brick Kiln Baptist Church.

“And 50 years later, God would have it that 2021 is the same calendar of 1971,” pointed out Senior Pastor Maynard. “This is no coincidence – fifty years to the day. From there on we never looked back and the rest is history and here we are today.” He however admitted that the first three years were “dark and difficult days.”

He told the congregation that when Pastor Wayne Maynard, who is his son, asked him to deliver the message on that auspicious occasion marking his 50 years in the ministry, he said he wrestled with the idea of preaching especially taking into account that the Prime Minister of the Federation would be present. But the younger Pastor Maynard finally convinced him that he should do the message for Sunday August 8, 2021.

Pastor Emeritus Eric Maynard thanked Prime Minister Harris for accepting the invitation to come to worship at Shiloh Baptist Church on that special day. He said someone had asked him how he and the Prime Minister got to be friends, and he said he believed God told the Prime Minster that he (Maynard) had been praying for him.

“God is my witness I did not tell the Prime Minister I pray for him every day,” said Senior Pastor Maynard. “I believe it is God who told him. I count it as an honour that I could call him whenever I want to, he can call me whenever he wants to and let me know what he wants me to pray about.”

According to the Pastor Emeritus, the struggles were real as it took them three years when the Lord turned their activities, and they realised the dream when they finally got started officially in October 1974.

“We moved from a living room to a wooden tent, then we moved on from the wooden tent when it caved in, to a rented house for a year, to the building what is now the Fellowship Hall, and from there here we are in our Sanctuary for which we give God thanks,” he summed up the 50-year journey. “This is a day of thanksgiving – a day of praise, for God has done great things for us. Tough times don’t last, tough people do.”

In reference to the Federation of St. Kitts and Nevis, Pastor Emeritus Eric Maynard said God has given the country natural blessings in the form of a great deal of sun, sea and sand, and natural beauty and he advised the congregation that they have to be thankful as they are living in paradise.

He also referred to the divine protection that God has given St. Kitts and Nevis, and people who have the wisdom to lead the population through the current Covid-19 pandemic. He criticised persons who are still resisting taking the vaccine on unsubstantiated claims that they might turn to crocodiles.

“God has blessed St. Kitts and Nevis, taking St. Kitts and Nevis out of the lions’ den,” said Pastor Eric Maynard. “There is a lions’ den called IMF. When they tell you jump, you just have to ask them how high. God gave the wisdom to get us out of that den. It took a great deal of planning and wisdom and God’s guidance and yet some people cannot appreciate that. God has blessed us.”